Digital healthcare is the convergence of digital and genomic technologies with the fields of health, healthcare, lifestyle and society, with the stated objective of improving the efficiency of healthcare delivery and make medicines more personalized and precise.

The way digital health is planned and implanted by the Powers-that-be, it is an abandonment of the right to bodily autonomy, privacy and the right to make decisions about one's own health, combined with an open door for Big Pharma products and at the same time leaving everyone at the mercy of deep state agencies. 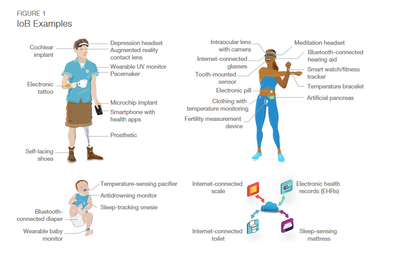 Examples of the Internet of Bodies from a RAND study.[1]

The Internet of Bodies (IoB) is a collection of devices that are connected to the Internet that contain software and that either collect personal health data about a person or can alter the body's function.

There are still basic unregulated questions about whether individuals have ownership over their personal data or have the right to opt out of data collection.[2], but given the way privacy rules have been destroyed during COVID-19 deep event, this is a moot point.

The selling point is that the "unprecedented amounts of personal health data could inform treatment plans that are completely tailored to a patient's needs."[3] The other side of the coin is that deep state forces are given the opportunity to control anyone's life and health, and could even assassinate anybody remotely and without trace if needed.

IoB devices will eventually be developed that will form part of the transhumanism agenda, where body-fused devices with a communication interface that allows interpreting and acting on the biological elements themselves[4].