Bar-Ilan University ('BIU) is a public research university in the city of Ramat Gan in the Tel Aviv District, Israel. Established in 1955, Bar Ilan is Israel's second-largest academic institution. It has 18,000 students and 1,350 faculty members.

The university aims to "blend tradition with modern technologies and scholarship, and teach the compelling ethics of Jewish heritage to all … to synthesize the ancient and modern, the sacred and the material, the spiritual and the scientific".[1] 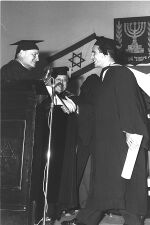 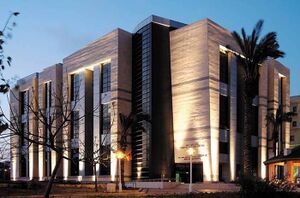 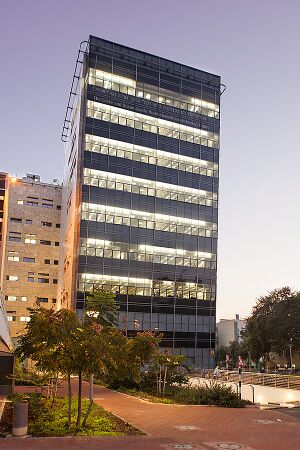 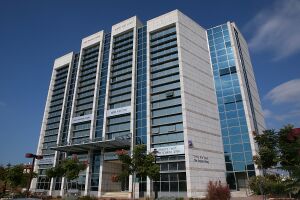 Centre for the study of philosophy, ethics and Jewish thought

Bar-Ilan University has Jewish-American roots: It was conceived in Atlanta in a meeting of the American Mizrahi organization in 1950, and was founded by Professor Pinkhos Churgin, an American Orthodox rabbi and educator, who was president from 1955 to 1957 where he was succeeded by Joseph H. Lookstein who was president from 1957 to 1967.[2] When it was opened in 1955, it was described by The New York Times "as Cultural Link Between the [Israeli] Republic and America".[3] The university was named for Rabbi Meir Bar-Ilan (originally Meir Berlin), a Religious Zionist leader who served as the inspiration for its establishment. Although he was trained in Orthodox seminaries in Berlin, he believed there was a need for an institution providing a dual curriculum of secular academic studies and religious Torah studies.

The founders of the university hoped to produce alumni committed to Jewish religious tradition, Zionist ideology, and science. In 1965, the professors and lecturers were all religious Jews, as were the majority of students. Yosef Burg, one of the prominent leaders of the religious Zionist movement, warned that admission of too many non-religious into the university could undermine its character: "If you spill too much water into a wine bottle, you will have no wine." Today, the student population includes secular and non-Jewish students, including Arabs. Seven courses in Jewish studies are required for graduation. In hiring senior academic staff, the university used to give preference to religious Jews,[citation needed] although this is no longer true, and the faculty includes many secular Jewish members, and also Arab faculty, such as Dr. Totry - Jubran Manal at the law faculty. Presidents who followed were Max Jammer (1967–77), Emanuel Rackman (1977–86), Michael Albeck (1986–89), Ernest Krausz (1989), Zvi Arad (1989–92), and Shlomo Eckstein (1992-96).[2]

Yitzhak Rabin's convicted assassin, Yigal Amir, was a student of law and computer science at Bar-Ilan, prompting charges that the university had become a hotbed of political extremism. One of the steps taken by the university following the 1995 assassination was to encourage dialogue between left-wing and right-wing students.[4][5]

Under university president Moshe Kaveh (1996-2013), Bar-Ilan underwent a major expansion, with new buildings added on the northern side of the campus. New science programs have been introduced, including an multidisciplinary brain research center [6] and a center for nanotechnology.[7] The university has placed archaeology as one of its priorities, and this includes excavations such as the Tell es-Safi/Gath archaeological excavations[8] and the recently opened Bar-Ilan University/Weizmann Institute of Science joint program in Archaeological Sciences.[9]

Bar-Ilan's Faculty of Law made headlines in 2008 by achieving the highest average Israeli Bar Exam grade of 81.9 by its graduates.[10] Daniel Hershkowitz was university President from 2013 to 2017.[2]

During Operation Protective Edge in 2014, the university allowed 30 of Dr. Uri Weiss’ students to switch out of his course after they accused him of being an extreme leftist and said they didn’t want to study with him.[11]

In 2016, the university became the center of controversy over women's rights. The university announced it would allow women to read passages of text and play musical instruments at its Holocaust Remembrance Day, but would bar women from singing in order not to offend Orthodox Jewish males. Other organizations, such as Ne'emanei Torah V'Avodah, protested that it is an Israeli custom to sing at national ceremonies, and that "extreme" Jewish religious law should not be imposed on the general public.[12]

Bar-Ilan operates a kollel for men and a midrasha for women. The kollel offers traditional yeshiva studies with an emphasis on Talmud, while the midrasha offers courses in Torah and Jewish philosophy. These programs are open to all students free of charge.

Arie Zaban became the President of the university in 2017.[2]

The center's mission is to cultivate a new generation of interdisciplinary scientists who integrate knowledge from different fields. The center offers several graduate level tracks, including a direct Ph.D. program, an M.Sc. program, and a combined program. Candidates are accepted from a variety of backgrounds, including biology, psychology, mathematics, physics, and computer science. Accepted students are exempt from tuition and receive a full scholarship during the course of their studies, allowing to fully concentrate on the research.

The Ph.D. training program builds on six single-semester required core courses, a set of preparatory courses, and a variety of elective courses. Students have to complete 8 credits in advanced courses. Additionally, students participate in a number of multidisciplinary activities including a weekly research seminar and two hands-on short-term research projects. Several advanced optional courses are available, allowing students to specialize in one of the three sub-fields:

The center also offers an undergraduate interdisciplinary program in neuroscience, providing a solid knowledge base in wide range of neuroscience related disciplines, such as life sciences, psychology, linguistics, mathematics and computer sciences, and physics, with a specialization in the field of choice.

Bar-Ilan offers an International B.A. Program,[13] taught entirely in English, and is the first university in Israel to offer a full undergraduate program taught entirely in English. Currently students can choose between a B.A. degree in interdisciplinary social sciences,[14] where students can choose between a macro track in economics, political sciences, and sociology,[15] or the Micro Track in Criminology, Psychology, and Sociology,[15] or a major in communications,[16] with a minor in either English literature or political science. The degrees are internationally recognized and are open to students from all over the world.[17]

In addition, Bar-Ilan offers a preparatory program that readies new immigrants for Israeli colleges. The university also runs a one-year overseas program called Tochnit Torah Im Derech Eretz, which combines traditional kollel Torah studies in the morning, separate for men and women, as well as co-ed general university studies and Jewish history classes in the afternoon. Many American students enrolled in regular programs of study in the university also take these Jewish history classes to fulfill their Jewish studies requirements.

Bar-Ilan's on-line responsa project was awarded the Israel Prize in 2007.[18] The university's Bible project, in danger of being eliminated by continued budget cuts, was saved at the last minute by an anonymous donor.[19]

In its capacity as a business school, Bar-Ilan was placed as the 4th best business school in Africa and the Middle East in the 2010 QS Global 200 Business Schools Report.[20]

The Leslie and Susan Gonda Multidisciplinary Brain Research Center (Hebrew: המרכז הרב תחומי לחקר המוח ע″ש לסלי וסוזן גונדה) focuses on a multidisciplinary approach to neuroscience. It houses over 30 laboratories investigating brain complexity at multiple levels, from single neurons, through information processing and computations in neural networks to cognition, behavior and human mind. The center's core members and affiliates combine multiple fields that are crucial for brain understanding, including molecular and systems neuroscience, cognitive neuroscience, psychology, psychiatry, linguistics, mathematics, computer sciences, engineering and physics. Numerous research approaches are employed by the center's scientists, such as brain stimulation techniques, neuroimaging, electrophysiology, molecular techniques, computational methods, mathematical modeling and behavioral and cognitive paradigms. The center was founded in 2002 thanks to the contributions of the Gonda family, the president of Bar-Ilan University Moshe Kaveh, and Moshe Abeles, a pioneer of Israel's neuroscience research, Emet Prize laureate (2004) and the founding director of the Interdisciplinary Center for Neural Computation at the Hebrew University (1992–1999), has led the Gonda Multidisciplinary Brain Research Center for nearly a decade. Since 2011, the center is headed by Moshe Bar, a cognitive neuroscientist and an expert in brain imaging technologies. Bar returned to Israel to head the Gonda Multidisciplinary Brain Research Center as its new director after thirteen years at Harvard University.

The Gonda Multidisciplinary Brain Research Center hosts the only magnetoencephalography facility in Israel, operated by the Electromagnetic Brain Imaging Unit established in 2008. Magnetoencephalography is a brain imaging technique that allows studying human brain responses by measuring the magnetic fields produced by electrical brain activity at superb (millisecond) temporal resolution. The unit is headed by Professor Abraham Goldstein. It is equipped with a 248 magnetometer sensors whole-head system, positioned inside a double-wall magnetically shielded room by IMEDCO. Once a week, magnetoencephalography is dedicated to serving the community by providing clinical and diagnostic services, such as localization of epileptic foci, via BrainMap.