Late on Monday 17 September 2018, a Russian Ilyushin-20 reconnaissance aircraft, with 15 servicemen aboard, was shot down over the Mediterranean Sea. A sea-launched French missile, an air-to-air Israeli missile and a Syrian S-200 air defence missile are each alleged to have downed the IL-20 ELINT plane.

President Vladimir Putin ordered a thorough investigation of the incident and called the Israeli bombings of Syria illegal.[1]

At approximately 22:20 (local time) on 17 September 2018, missile strikes that hit multiple targets in government-controlled western Syria were conducted by the Israeli Air Force. The strikes took place a few hours after a Russo-Turkish agreement to create a demilitarised zone around the Idlib Governorate was achieved, which postponed an imminent offensive operation by Syria′s forces and its allies.[2]

Missiles struck the Latakia, Tartus and Homs governorates of western Syria hitting the Institute of Technological Industries, a subsidiary of the Syrian Ministry of Defence, on the outskirts of Latakia.[3] The Syrian Observatory for Human Rights reported that the missiles had targeted ammunition depots there.[4]

Downing of the IL-20

During Israel's attack, an Ilyushin IL-200 ELINT reconnaissance plane returning to Khmeimim Air Base, with 15 Russian servicemen on board, was shot down by a Syrian S-200 surface-to-air missile 35km from the Syrian coast.[5][6] The Russian military received a one minute warning prior to the attack, which it said was not enough time to get the IL-20 out of the way.[7]

Russian officials initially said that the French frigate Auvergne launched missiles during the strikes in addition to the Israeli F-16's.[8] France denied any involvement.[9] The following day, Russia acknowledged Syrian air defences had been responsible. However, Russia′s defence minister Sergei Shoigu blamed Israel′s military for the accident because, according to the ministry, the Russian military had only received one minute’s warning from Israel about the impending missile strikes and the four Israeli F-16 jets that conducted the strikes deliberately used the Russian plane as cover to allow them to approach their targets on the ground without being hit by Syrian fire.[10][11]

According to the Israeli military, the Israeli jets were already in Israeli airspace when the IL-20 was shot down. According to Israel, the Syrian government is fully responsible for the missile fire, however Israel offered its condolences to Russia for the death of the crew.[12] According to the IDF spokesperson "The Syrian anti-aircraft batteries fired indiscriminately and, from what we understand, did not bother to ensure that no Russian planes were in the air", further adding that "The extensive and inaccurate Syrian anti-aircraft missile fire caused the Russian plane to be hit".[13]

According to Mexican-American journalist Joaquin Flores and Austrian economist Tom Luongo, it was the French frigate Auvergne that downed the Russian aircraft:

The setup is pretty clear. Israel and France coordinated an attack on multiple targets within Syria without US involvement but with absolute US knowledge of the operation to provoke Russia into going off half-cocked by attacking the inconsequential French frigate which assisted Israel’s air attack.

That would constitute an attack on a NATO member state and require a response from NATO, thereby getting the exact escalation needed to continue the war in Syria indefinitely and touch off WWIII.[17]

Putin is trying to save Russian/French relations by not naming France as the culprit for the lost plane and the 15 men. That Russia noted French missile launches but didn’t say what or who they hit. And before the Russians said anything about the attack the French denied they had any involvement in the attack.

Instead, Russia went along with the story the US et.al. prepared in advance, which doesn’t fit what facts we know about the situation, that Syrian air defences shot down the IL-20 by mistake.

Both the French denial and the US statements about Syrian air defences being the culprit came before anything official came from the Russians.

This is a classic “preparing the narrative” technique used by the West all the time. Seize the story, plant seeds of doubt and put your opponent into a rhetorical box they can’t wiggle out of with the truth. MH-17, Skripal, Crimea, "chemical weapons" attacks in Ghouta, Douma etc. These operations are scripted.[18] 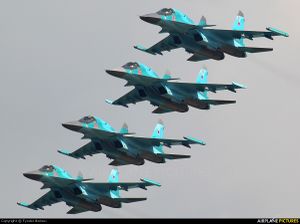 When Israel launched a missile attack on Syria using F-16's over the Mediterranean Sea, the F-16's were intentionally operating very close to a much larger Russian IL-20 Electronic Intelligence aircraft, using that aircraft as a sort of radar cover.

When Syrian defences opened fire to stop the inbound missile attack, they locked-onto the Russian plane and shot it down.

Russia blames Israel for using a Russian plane to launch a sneak attack, causing the deaths of 14 or 15 Russian airmen.

After this incident, Russia basically imposed a No-Fly zone upon Israel by announcing sea and air live-fire exercises in the eastern Mediterranean off the coasts of Syria and Israel. No Israeli war planes are permitted to fly outside the territory of Israel unless they do so at an altitude above 19,000 feet. At such altitude, they would be easy targets for Syrian air defences.[19]

Below that altitude, Israeli planes would be "in the way" of an announced Russian military exercise where they could "accidentally" be hit by missiles from Russian naval vessels.

Israel apparently decided to test whether Russia meant what it said, and the Israelis sent up two F-16's to fly into Lebanon at an altitude below 19,000 feet. Those planes were intercepted by Russian Sukhoi SU-34's and forced to turn back to Israel.[20]

This page imported content from Wikipedia on 22 September 2018.
Wikipedia is not affiliated with Wikispooks.   Original page source here
Retrieved from "https://wikispooks.com/w/index.php?title=2018_missile_attack_on_Russian_IL-20_reconnaissance_aircraft&oldid=219453"
Categories: