The 1997 military memorandum (28 Şubat, "28 February"; also called Post-modern darbe, "Post-modern coup") in Turkey refers to the 'requests' issued by the Turkish military leadership on a National Security Council meeting on 28 February 1997. This memorandum initiated the process that precipitated the resignation of Islamist prime minister Necmettin Erbakan of the Welfare Party, and the end of his coalition government.[1]

As the government was forced out without dissolving the parliament or suspending the constitution,[2] the event has been famously labelled a "postmodern coup" by the Turkish admiral Salim Dervişoğlu.[3][4][5] The process after the coup is alleged to have been organised by the Batı Çalışma Grubu ('Western Working Group'), a purported clandestine group within the military. 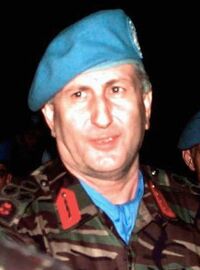 In 2012, Hasan Celal Güzel said that General Teoman Koman had approached him in September 1996 with a plan to install him or Mesut Yılmaz as Prime Minister after a planned coup. Güzel declined to get involved,[7][8] and Yılmaz was appointed Prime Minister after the coup. 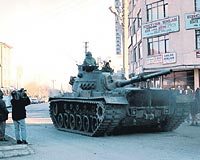 Tanks moving on the streets of Sincan

On 31 January 1997, protests were arranged by the Sincan municipality in Ankara, against Israeli human rights violations that took place in guise of an "Al-Quds night". The building in which the event took place was plastered with posters of Hamas and Hezbollah.[9] As a reaction to the demonstration, tanks moved to the streets of Sincan on 4 February. This intervention was later described by Çevik Bir as "a balance adjustment to democracy".

On February 28, 1997, the National Security Council (MGK) met in Ankara. The chief of staff and the heads of the three weapon arms sit there alongside the head of state, the head of government and key ministers. This body, provided for by the constitution, theoretically only has an advisory power, but in fact it has a decisive political role. On that day, the MGK took about twenty decisions (referred to as “recommendations”), put forward by the generals, on questions relating to secularism and political Islam. Prime Minister Necmettin Erbakan, of the Welfare Party, is forced to sign the memorandum recording these decisions, and works to play down the situation by declaring to be in total harmony with the military[10].

Most of these decisions are reminiscent of existing laws, but have fallen into disuse, such as the ban on wearing Islamic clothes (headscarfs) or the law on the unification of education of March 3, 1924. Concerning education, the military demanded the closing religious schools or transforming them into public schools, and want the duration of compulsory schooling to be extended to eight years.

Certain “recommendations” however require the introduction of new legislative measures, in particular to clamp down on financial organizations controlled by religious brotherhoods, the infiltration of Islamists into public administration, or the construction of dozens of new mosques.[11]

In the months that followed, the recommendations are followed through with decrees, laws or media pressure. Lists of companies run by Islamists or having financed religious brotherhoods are made public. Religious schools and mosques are placed under surveillance. The number of people arrested for "fundamentalism" doubles in one year. People are dismissed from public administrations. A law on education was passed on August 16, 1997. The Council for Higher Education also amended the rules of equivalence to make it difficult for students from a theological faculty to enter a university, other than a theological faculty, 'schools for imam or preachers etc.[12]

After procrastinating by agreeing to apply the measures deemed necessary by the National Security Council to fight against the “Islamist reaction forces”[13], Erbakan was forced to resign on June 18, 1997. At the beginning of June, 186 associations and unions and the three main confederations of employees had launched a joint appeal to the Islamist Prime Minister, encouraging him to withdraw. The memorandum of February 28, 1997 thus resulted in the overthrow of the government, without blood spilling, without a military power officially replacing the civilian power, and without the constitution being called into question or the parliament being dissolved.[14][15]

The majority coalition in parliament, notably associating the Welfare Party and the Fair Path Party (in Turkish: Doğru Yol Partisi or DYP), proposes Tansu Çiller to succeed him as Prime Minister. But President Süleyman Demirel appoints Mesut Yılmaz, leader of the Motherland Party (ANAP), to form the new government. On June 30, he forms a new team with Bülent Ecevit, leader of the Democratic Party of the Left (DSP) and Hüsamettin Cindoruk (the founder and leader of the Party of Democratic Society, in Turkish Demokratik Toplum Partisi or DTP), a new party founded after February 28[16][17] 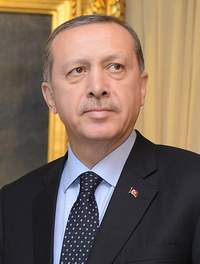 The Welfare Party was dissolved by the Constitutional Court of Turkey in 1998 for violating the constitutional clause of separation of religion and state. Erbakan is sentenced to one year in prison for inciting religious hatred and hostility, and one of his relatives, Recep Tayyip Erdoğan, mayor of Istanbul, is sentenced for the same reasons to 10 months in prison. Supporters of the Welfare Party joined the Virtue Party, created in 1998, which in turn was dissolved in 2001.[18][19]

Released from prison, Recep Tayyip Erdoğan then founded the Justice and Development Party or AKP (in Turkish: Adalet ve Kalkınma Partisi). He made this moderate Islamic party the leading Turkish political force, won the 2002 elections, and became head of government in 2003. These event are the reason he endeavored to reduce the influence of the military on Turkey's political life.

Among the strong signs of the army being "brought to heel", in April 2012 he arrested General Çevik Bir and around twenty other senior Turkish army officers, followed in January 2013 by the arrest of General Ismail Hakki Karadayi, for their role in these events of 1997. [20]Pending their trial, he had them imprisoned in Sincan, the town on the outskirts of Ankara where one of the military demonstrations of force took place.

On April 13, 2018, 21 soldiers involved in the memorandum were sentenced to life imprisonment. The generals İsmail Hakkı Karadayı and Çevik Bir were left on probation due to their old age. 68 defendants were acquitted and 4 proceedings are closed due to the death of the defendants.[21]

Opinions on the memorandum

It is alleged that Bülent Orakoğlu of the police intelligence, under Hanefi Avcı, knew about the coup plans.[23]

Çevik Bir, one of the generals who planned the process, said:

“In Turkey we have a marriage of Islam and democracy. (...) The child of this marriage is secularism. Now this child gets sick from time to time. The Turkish Armed Forces is the doctor which saves the child. Depending on how sick the kid is, we administer the necessary medicine to make sure the child recuperates.”
Çevik Bir [24]
Çevik Bir led the 1997 Post-modern coup

Necmettin Erbakan claimed that the process was planned by "Zionists".[25]

In October 2016, Tuncay Özkan claimed that the 28 February process was prepared and organized by the Gülen movement.[26]

This page imported content from Wikipedia on 01 January 2021.
Wikipedia is not affiliated with Wikispooks.   Original page source here
Retrieved from "https://wikispooks.com/w/index.php?title=1997_Turkish_military_memorandum&oldid=201512"
Categories: