The 9/11 Commission Report mentioned the name of Buzzy Krongard, former executive director of the CIA, stating:[1]

"A single U.S.-based institutional investor with no conceivable ties to al Qaeda purchased 95 percent of the UAL puts on September 6 (2001) as part of a strategy that also included buying 115,000 shares of American on September 10. Similarly, much of the seemingly suspicious trading on September 10 was traced to a specific U.S.-based options trading newsletter... which recommended these trades."[2]

The implied conclusion is that having "no conceivable ties to al Qaeda" the investor could not have had foreknowledge of the attacks.

The German Central bank studied the possibility of insider trading. According to German central bank president Ernst Welteke, the German researchers found “almost irrefutable proof of insider trading”.[3] Welteke said bluntly: “What we found makes us sure that people connected to the terrorists must have been trying to profit from this tragedy.”[4]

The SEC was active in attempting to cover up evidence of insider trading. There was a lot of evidence of trading in the run up to 9/11 consistent with foreknowledge. David Callahan – executive editor of SmartCEO – submitted a Freedom of Information Act request to the SEC regarding the pre-9/11 put options. He was told: "We have been advised that the potentially responsive records have been destroyed."

“Highly publicized allegations of insider trading in advance of 9/11 generally rest on reports of unusual pre-9/11 trading activity in companies whose stock plummeted after the attacks. Some unusual trading did in fact occur, but each such trade proved to have an innocuous explanation. For example, the volume of put options- investments that pay off only when a stock drops in price-surged in the parent companies of United Airlines on September 6 and American Airlines on September 10-highly suspicious trading on its face. Yet, further investigation has revealed that the trading had no connection with 9/11. A single U.S.-based institutional investor with no conceivable ties to al Qaeda purchased 95 percent of the UAL puts on September 6 as part of a trading strategy that also included buying 115,000 shares of American on September 10. Similarly, much of the seemingly suspicious trading in American on September 10 was traced to a specific U.S.-based options trading newsletter, faxed to its subscribers on Sunday, September 9, which recommended these trades. These examples typify the evidence examined by the investigation. The SEC and the FBI, aided by other agencies and the securities industry, devoted enormous resources to investigating this issue, including securing the cooperation of many foreign governments. These investigators have found that the apparently suspicious consistently proved innocuous. Joseph Cella interview (Sept. 16, 2003; May 7, 2004; May 10-11, 2004); FBI briefing (Aug. 15, 2003); SEC memo, Division of Enforcement to SEC Chair and Commissioners, “Pre-September 11, 2001 Trading Review,” May 15, 2002; Ken Breen interview (Apr. 23, 2004); Ed G. interview (Feb. 3, 2004).”
' [5] 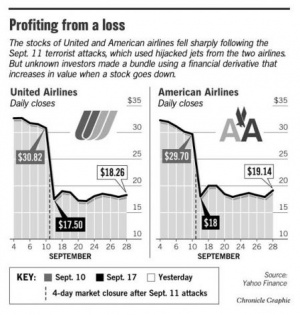 +
Has image2
File:9-11_insider_trading.jpg +
Has noRatings
0 +
Has objectClass
Event +
Has objectClass2
Event +
Has parentFullPageName
9-11 +
Has perpetrator
9-11/Insider Trading/Perpetrators +
Has revisionSize
4,638 +
Has revisionUser
Robin +
Is not stub
true +
Start
September 6, 2001 +
Has subobject"Has subobject" is a predefined property representing a container construct and is provided by Semantic MediaWiki.
9-11/Insider Trading +