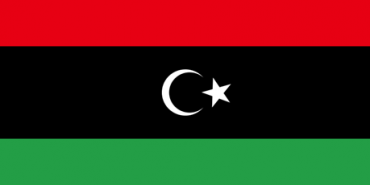 World For Libya is a UK registered charity (#1142409), incorporated on 14 Jun 2011. It should not be confused with the identically named private limited company incorporated by the original 5 trustees of the charity just 3 weeks before. [1] The group later formed another company (with a different legal status) "World for Libya Consultants".

The group's 2011 report[2] mentions offices in Tripoli, Misrata and Banghazi. Its stated aims are to "relieve sickness and to promote and project good health through provision of medical aid, medical infrastructure and logistics and the provision of training to doctors and other health-care professionals and ancillary staff that are needed to ensure a broad and comprehensive health care system, education for Libyans and the relief of financial hardship for refugees and other displaced Libyans."[3].

No mention is made of the identically named private company incorporated by the trustees 3 weeks before registering the charity.

The charity's overview instructs would be donors that "All cheques should be made payable to “World for Libya”".[8]

On 2011-05-25, UK limited company #07647639 was formed, entitled "World for Libya", with registered address 8 Chesterfield Hill, Mayfair, London. As a private company limited by guarantee without share capital, under Section 30 of the 1985 Companies Act it applied for and was granted[9] an exempted from using the word "Limited",[10] allowing it to trade simply as “World for Libya”. The directors were very similar to the World for Libya charity: Mr Faraj Abdulla Ahnaish Saleh Ahnaish, Mr Richard John Batten Hillier, Mr David Charles Freeman, Mr Salaheddin Mohamed Mussa, Mrs Reem Abdelkarim Taher, Mr David Mallcolm Nott & Mr Willem George Baralt.[11] The documentation lists 3 categories of activity: "Physical well-being activities", "Other human health activities" & "Other service activities not elsewhere classified". The company has no assets. It posted a profit of £200,260 (from a turnover of £765,060) in 2012, a loss of £47,932 (turnover £5,651) in 2013 and a loss of £208 (turnover £1,950) in 2014.[12].

On 2012-07-12, non-trading UK company #08140193 was formed, entitled "World for Libya Consultants Ltd", registered address elsewhere in Mayfair, with an identical set of directors to "World for Libya" above.[13][14] As of August 2014, no accounts of the company's activities are available on the internet. The company is active but dormant, after posting on 2014-04-14 a dormant set of account the year ending 31 July 2013, which the board approved on 9 April 2014.[15] Salaheddin Mohamed Mussa is now the sole remaining board member, after the other members of the board left in Jun/July 2014.

Relationship With the Libyan Rebels

Background header image of the First World for Libya website.[16]

According to the UK charity commission, "an organisation cannot be a charity if it has a 'political purpose'."[17] As a UK charity, World For Libya is therefore explicitly prohibited from "furthering the interests of a particular political party" or from "securing or opposing any change in the law, whether in the UK or overseas".[17]

The charity's logo clearly bears a remarkable similarity to the Libyan flag reinstated by the Libyan rebels, and their website is covered with the flag, an indication that the charity aligned itself firmly with the rebels.

Relationship to Hand in Hand for Syria

World For Libya has no known acknowledged connection to Hand In Hand For Syria, a group which registered as a UK charity 8 months later. However, the parallels are striking:- both are apparently humanitarian groups with logos highly indicative of a political affiliation to a rebel group. Moreover, they have both have been assisted by independent film maker Saleyha Ahsan. She reports this connection to be coincidental, writing that it "was by some bizarre fluke that returning home from that first short trip [to Libya] that I sat next to Nader Elhamessi, a Libyan, a Londoner for many years and one of the founders of the aid organization World for Libya"[18]

Nader Elhamessi, mentioned by Saleyha Ahsan as a founder of World for Libya[18], is also reported as having an affiliation to "World Medical Camp Libya", reported by The Guardian as "a charity set up in the UK on 22 February [2011] to provide aid within the country."[19][20] This group, like World for Libya, had a website liberally sprinkled with the colours and logo of the rebels' flag and its "About" page, signed by "DR A. S." declared its goal as "Coordinating and streamlining the humanitarian relief to Libyans in and outside our beloved country."[21] The website domain has since lapsed and is now cybersquatted, but archived copies are available.[21] Russ Baker and others have questioned the integrity of this institution and its reporting of Gaddafi's atrocities.[22][23]

The domain name "WorldForLibya.org" was registered on 20 May 2011. The site's homepage has been broken since at least October 2013, but the File:WorldForLibyaOverview.pdf is available nonetheless. Their twitter account was last used on July 5th, 2012. Their Facebook page was removed in Summer 2014, and was unavailable as of August 16, 2014. However, by October 2016, it was open again[24] but their London street address (8 Chesterfield hill) was marked "permanently closed". Another facebook page, but since the logo was updated to include arabic on July 2, 2012, as of October 2016, had only a single post "Hi every one :)" make on July 24, 2014. 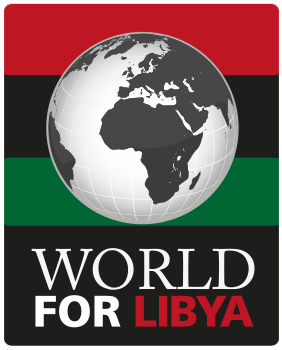