"The pictures from Italy"

"The pictures from Italy" were an element of fearmongering used to promoted COVID-19 panic in March and April 2020. They were dramatic pictures of overwhelmed hospitals and army convoys furtively moving away corpses at night in Northern Italy. 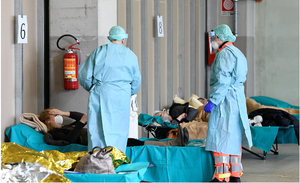 Northern Italy has one of the best public health systems in the Western world. More than in about four weeks in February/March 2020. With over 31,500 confirmed cases and 2,500 dead, the country's doctors and nurses were struggling to keep up. They were running out of beds, equipment and even people, as the hospitals' intensive care unit were occupied by coronavirus patients hooked up to ventilators. The limited resources were forcing doctors to make excruciating decisions about whom to treat — and who may be beyond help.[1]

As Italy hit its highest single-day death toll in March 2020, the army was brought into Bergamo, the country’s worst affected city to remove dozens of coffins piling up in churches or filling morgues beyond capacity. Video footage showed a column of military vehicles snaking through the streets of the city to collect around 60 coffins to be transferred to central Italy for cremation. Residents responded to the ghastly sight of army vehicles carrying coffins away with sorrow and shock. “Seeing the street behind your house invaded by army vehicles is a sight that is bound to have an effect on you,” Lucia Ferrante, a resident of Bergamo, told The Independent.[2]

While the health system once was world class, a few decades of austerity and neoliberal "reforms" have reduced has capacity, including in intensive care units (ICUs).[3]. In completely normal winters, the ICUs in Lombardy already have an occupancy rate of 85 to 90 percent[4][5].

Significantly, there has been an above-average number of patients with severe respiratory diseases in northern Italy, because of a huge problem with air pollution[6]. Nowhere in Europe is air pollution killing so many people as in Italy [7].

In 2018 there were alarming reports[8] from hospitals in northern Italy, and appeals to doctors from other regions to save the completely overburdened clinics from collapse. However, these news and images did not find their way into global corporate media, so the problem "did not exist".

Noticeable in the official narrative is the chosen treatment protocol with large-scale use of ventilators and the following heavy antibiotics[9], in itself a procedure with high death rate. This in a country struggling with antibiotic resistant bacteria. [10] The doctors also seem to hint at triage and deliberate euthanasia, similar to what happened in England and other places.[1]

The 2021 documentary CORONA.film Prolog by OVAL media details the circumstances in Bergamo with on location interviews that were conducted after the first lock-down ended.[11][12][13]

Also, Italy is a Catholic country. The large majority prefers burial over cremation, thus crematoria capacity is very small. When the rules were changed, the small ovens could not handle the demand.[16]

Even if it by no means is a causality, it is striking that a vaccination campaign against meningitis took place just a few weeks earlier in the very northern Italian region from which the greatest problems in connection with the coronavirus were reported. 34,000 people between the ages of 11 and 60 were vaccinated, which in turn does not match the increased number of those who died older than that. The vaccination campaign started in mid-January and the time to take effect was estimated at 15 to 20 days[17][18] [19] Two months earlier, over 100,000 people in the same region had been vaccinated against influenza and pneumococci[20].

In October 2021 the official Italian Higher Institute of Health (Istituto Superiore di Sanità) corrected the number of estimated COVID deaths since February 2020, from over 130,000 to below 4,000. It turned out that 97.1% of the deaths that had so far been attributed to Covid-19 were not directly related to the disease. At the same time, the health institute reported that COVID has killed fewer people than the average seasonal flu.[21]

Footage of crowded Italian COVID-19 hospital wards were repeatedly used by US media, with titles indicating they were in New York or elsewhere in the US.