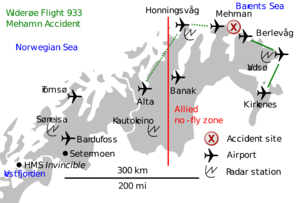 Widerøe Flight 933, also known as the Mehamn Accident, was the crash of a de Havilland Canada DHC-6 Twin Otter operated by Norwegian airline Widerøe. The Twin Otter crashed into the Barents Sea off Gamvik, Norway on 11 March 1982, killing all fifteen people on board. The crash was caused by a British fighter plane during a NATO military exercise, within a self-declared no-fly zone for allied military aircraft, a course of event that still to this day is denied by the Norwegian government.

The results of the four official investigations were that the accident was caused by structural failure of the vertical stabilizer during clear-air turbulence. A mechanical fault in the elevator control system caused the pilots to lose control of pitch; and either a series of stalls or a high-speed gust of wind caused the aircraft to lose altitude without the ability of the crew to counteract, resulting in the failure of the vertical stabilizer.[1]

The pilot of the accident plane was never found. But his shoulder insignia on his shirt, torn off an sitting orderly on the ocean floor, were found by divers.[2]

Journalists who tried to investigate were attempted misled by undercover military agents [Citation Needed]. The state media channel NRK was pressured to retract a story presenting the testimony of witnesses that were not heard during the investigations. [Citation Needed]