The Collapse of Europe Conference

The "The Collapse of Europe?" Conference was a 2 day conference in California in June 2007. One reviewer summarised it as "a sickening collection of false prophets... ready to play into any McCarthyist campaign that promises some minutes of fame on Fox News... a plot against European humanistic policies with American taxpayers' money".[1] Tashbih Sayyed‎ was a planned speaker but died before the conference happened.

The left half of the images that topped the conference schedule

The right half of the images that topped the conference schedule

The publicity featured violent images that could have been calculated to promote Islamophobia.[2]

Introduction: The Collapse of Europe

Afternoon Breakout Sessions: The Consequences for the United States

17:30-18:00 • What steps can be taken in the United States to address the problems of Europe? Hugh Hewitt

The application warned that "space at the closed door session is extremely limited and seats will be allocated on a first come, first served basis. Please include a separate check for this session." The cost was $100 for June 11.

Retrieved from "https://wikispooks.com/w/index.php?title=The_Collapse_of_Europe_Conference&oldid=154389"
Categories:
... more about "The Collapse of Europe Conference"
RDF feed
Constitutes
Conference +  and Islamophobia +
Description
An openly Islamophobic conference in California, that may have been designed to promote Islamophobia in Europe as part of the "War On Terror". +
Display docType
Wikispooks Page +
Display image
File:The Collapse of Europe Conference.jpg +
Display image2 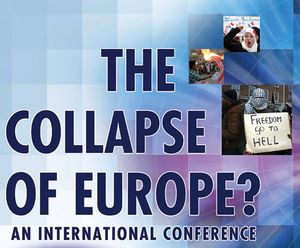