Styxhexenhammer666 is an American YouTuber. He is a libertarian and former satanist who makes videos talking about politics. 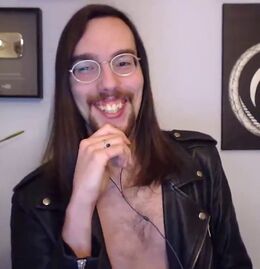 Tarl Warwick, your friendly satanist next door. Once asked by Jay Dyer, if he is a member of the 666 mafia, he answers: "I don't even know what that refers to."[1]

His most popular video is entitled Being an Ex Satanist: Why I Left Satanism Behind and What Satanism Means.[2]

He was one of the few proponents of the "4D Chess" theory during the PewDiePie ADL controversy.[3]

During COVID-19 he criticised vaccine mandates and lockdowns.

Thanks to his username, everybody sharing his videos does so under the number 666, which in itself does not mean anything for most, but for occultists and satanists it does.

“[...] this is from the Satanic Temple, I got some good things to say about them, but they are not exactly doctrinal in the original spirit of what is athestic satanism, but ill get into that as well [...] If you know anything of the history of, what we would consider canonical LaVeyin style satanism, and they are, these aren't devil worshipers, these are atheists effectively trying to troll Christians. They typically focus on constitutional and civic things, that [unintelligible] I can respect, they are the ones that put up the baphomet statue there [...]”
Tarl Warwick (17 January 2022)  [4]