Sir Stephen House (born 1957 in Glasgow) is the Acting Commissioner of Police of the Metropolis following the departure of Dame Cressida Dick on 10 April 2022.

After joining Sussex Police in 1981, House had roles of increasing responsibility and seniority in a number of police forces before he was appointed the first Chief Constable of Police Scotland on 1 October 2012. He stepped down in December 2015.

In June 2015, it was revealed by The National newspaper through a freedom of information (FOI) request that Sir Stephen House had been rebuked by Brian Lockhart, a senior Scottish judge, for failing to “recognise the role of the judiciary” in the case of a policeman jailed for covering up a drink-driving case.[1]

In July 2015, a motion calling for Sir Stephen House to resign as Police Scotland’s Chief Constable was tabled at the Scottish Parliament. Labour’s justice spokesman Hugh Henry, who tabled the motion, said:

"The public are rapidly losing confidence in Police Scotland after a series of major mistakes. Revelations of recent days appear to confirm that the tragedy on the M9 wasn’t an isolated incident and was the result of a number of failures since the creation of Police Scotland. Sir Stephen House should resign with immediate effect."[2]

In August 2015, it was reported that Sir Stephen House could be called before MSPs over claims police were illegally intercepting communications and spying on journalists.[3] Later that month, House confirmed that he would step down as Chief Constable of Police Scotland by December 2015.[4] His successor Phil Gormley was sworn in as Chief Constable on 5 January 2016.[5]

Stephen House was born in Glasgow in 1957 and grew up in Castlemilk, before moves to Bishopbriggs and Inchinnan in the metropolitan area of Glasgow. His father, William, worked for the Imperial Cancer Research Fund, finishing his career as a senior manager. His mother, Alice, worked in a laboratory until becoming a full-time parent to her children. He has a younger brother, Jonathan, who was also a senior police officer, as Police Commander for Sheffield, and a trained hostage negotiator, before becoming a senior officer in local government in Bristol and Cardiff and currently, a Director with Price Waterhouse Coopers.[6][7]

House was initially educated at the independent Kelvinside Academy in Glasgow but, when he was 11, his family moved to London, where he continued to be privately educated, in Hampstead. He has acknowledged that his Glasgow accent led to his being singled out and that this probably led to his adoption of an Estuary English voice, although he claims to feel himself Scottish and, particularly, Glaswegian.[8] House returned to Scotland in 1976, to study History and English Literature at the University of Aberdeen.

House has been married since 1987, with three children, two girls and one boy, and lives in Helensburgh on the Firth of Clyde, some 20 miles west of Glasgow. He has acknowledged that he has few interests outside of his family and his job, although he enjoys hill walking and reading science fiction. He is also a keen motorcyclist and was known to turn up unannounced at police stations on a motorcycle when he was Chief Constable of Strathclyde Police.[9]

House cites good experiences of the police in Aberdeen during his time as a student there, while also noting that he wanted a role in a disciplined, hierarchical environment.

He joined Sussex Police in 1981, transferring in 1988 to Northamptonshire Police, where he was promoted to Sergeant. He remained a uniformed officer until 1992 and progressed to Chief Inspector before moving in 1994 to West Yorkshire Police where he worked as a Superintendent in the Performance Unit. He was promoted to Divisional Commander in Central Bradford prior to being appointed Assistant Chief Constable of Staffordshire Police in 1998.

He joined the Metropolitan Police in December 2001, as a Deputy Assistant Commissioner, working in Policy Review and Standards. In early 2003, he moved to Territorial Policing, setting up the Territorial Support Group within the Central Operations Branch, where he was appointed Assistant Commissioner. In 2006, as Commander of the Specialist Crime Directorate, he had responsibility for a diverse command including homicide, child abuse, economic crime, the Flying Squad, undercover policing, gun crime, forensics and the disruption of criminal networks.[10]

House was appointed as Chief Constable of Strathclyde Police in 2007 and joined the force formally in November that year, succeeding Sir Willie Rae, the retiring Chief Constable.

His time in Strathclyde saw a substantial increase in officer numbers and a marked decrease in crime, most notably violent crime. Under his command, the Strathclyde force launched a major effort to combat the gang culture that drives much of crime in Glasgow. This was carried out with a combination of aggressive and often outspoken policing. The Community Initiative to Reduce Violence (CIRV) proved successful in combating local gangs through a combination of persistent arrests and diversion tactics to steer youths away from crime.

During his time at Strathcyde Police, House also helped to establish the Scottish Government's Joint Action Group on Football, of which he is a member. He had called on the First Minister of Scotland, Alex Salmond to host a football summit in March 2011. The summit was held following a number of high-profile incidents at 'Old Firm' football games, and a steady increase in incidents of crime and anti-social behaviour taking place across the Force area on days when games between the two clubs were taking place. The Joint Action Group was established soon afterwards.

Application for appointment as Metropolitan Commissioner

While in post at Strathclyde, and after being contacted by Home Office officials, Stephen House applied to become the Commissioner of Police of the Metropolis.[11] following the resignation of Sir Paul Stephenson. Bernard Hogan-Howe was eventually appointed to the post.

House acknowledged that he was disappointed at being unsuccessful in his application. He was quoted as saying “You don’t put yourself forward for a job like that lightly, and unfortunately you do it in the full glare of publicity, so it was a pretty difficult situation”.

In February 2011, in advance of a conference on the future of policing, House commented that a national Scottish police force would be better equipped to deal with major incidents.[12]

On 25 September 2012 it was announced that House was to be appointed as the Chief Constable of the new Police Scotland, which came into operation on 1 April 2013. On 1 October 2012, he was sworn in as Chief Constable.[13]

Sir Stephen's decision to use armed police officers for normal duties has been heavily criticised by many, including Scottish politicians,[14] Police federation members[15][16] and other senior police officers.[17] 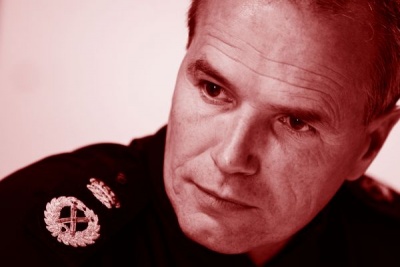 Will Bernt Carlsson murder inquiry be given House-room?

In February 2014, the Scottish Parliament’s Justice Committee chair Christine Grahame said she would write to Chief Constable Sir Stephen House demanding answers, after accusing the force of “procrastinating and obfuscation” and attempting to “kick into the long grass” concerns about the conviction of Abdelbaset al-Megrahi for the Lockerbie bombing.[18] John Finnie, an independent MSP and former police officer, said:

“The Scottish Government has no plans to launch an inquiry – I find that unfortunate. These are allegations of criminality in a mass murder case.”

The Justice Committee had been handed a letter from senior investigating officer, Detective Superintendent Stuart Johnstone, written to Justice for Megrahi (JFM), which was not able to determine how many officers were working on this inquiry, or what stage it was at:

“I think this is a dismissive approach by an authority to JFM, and by definition to this committee. What we have seen is procrastination and obfuscation. I can’t see the Crown Office injecting any sense of urgency.”

The original petition had called for an inquiry into the conviction, but the SNP Scottish Government has made clear the only place it should be examined is in the courts. Ms Grahame, an SNP MSP, told Mr Finnie:

“You talk about obfuscation and procrastination, I call it kicking it into the long grass. It seems to me to be extraordinary in regards to the question how many officers are working on the inquiry, that (the letter states) I’m unable to provide you with definitive updates as it’s being reviewed by myself. How long does it take to work out how many officers are working on it and what stage it is at? I think we should write to the Chief Constable to ask him and require an answer within ten days.”

“I am absolutely delighted that the Justice Committee is going to be writing to Sir Stephen House.”[19]

In May 2015, veteran Lockerbie campaigner Patrick Haseldine called upon Metropolitan Police Commissioner Sir Bernard Hogan-Howe to launch a murder inquiry into the targeting of UN Commissioner for Namibia Bernt Carlsson on Pan Am Flight 103. In August 2015, Haseldine resisted Sir Bernard's attempt at passing the Lockerbie buck to Police Scotland.[20]

In November 2013 Stephen House took up the role of Patron of the national police charity the Police Roll of Honour Trust. He joined Bernard Hogan-Howe and Hugh Orde as joint patrons.[21]

This page imported content from Wikipedia on 5 August 2015.
Wikipedia is not affiliated with Wikispooks.   Original page source here
Retrieved from "https://wikispooks.com/w/index.php?title=Stephen_House&oldid=242817"
Categories: