From Wikispooks
(Redirected from SpinProfiles)
Jump to navigation Jump to search 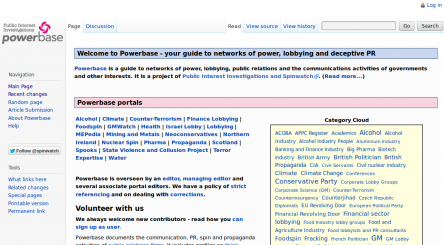 
Owner: Public Interest Investigations
In its own words:
"Powerbase is a free encyclopedia of people, issues, and groups shaping the public agenda that is being written collaboratively on this website. It catalogues descriptions and details of PR firms, activist groups and government agencies as well as the criticisms that are made of these groups from different perspectives."

Powerbase is a wiki-based free encyclopaedia into PR, corporate and political spin.

Spinprofiles was shut down on 21 June, 2010 by Webhosting firm 1&1, [1] because of a profile on think-tank researcher Alexander Meleagrou-Hitchens, son of journalist Christopher Hitchens. Further details were requested but not supplied. The content was moved to a new domain name, Powerbase, which was registered through a different webhost.

SpinProfiles, now Powerbase was a major source of content and inspiration when setting up the Wikispooks site.