Save Cox's Walk Footbridge Oaks is a campaign to save two healthy, mature oak trees from being cut down as part of Southwark Council's proposed repairs to the footbridge on Cox's Walk, Sydenham Hill and Dulwich Woods in London. Notices have been posted saying that contractors FM Conway and subcontractors C S G (Ushers) Ltd are to remove the trees in the week commencing Monday 16 November 2020.

A 38 Degrees petition organised by Pennie Hedge, founder of the Save Cox's Walk Footbridge Oaks campaign, has garnered over 5,000 signatories.[2] On 26 November 2020, the @SaveOaks campaign tweeted:

"Planning permission to fell the trees lapses in 7 days.

"@lb_southwark @RoseCllr you don't need planning permission to work with our engineers and save the trees if @AECOM and @FMConwayltd are unable to help."[3] 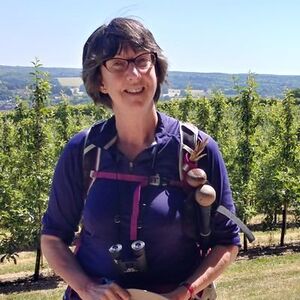 Pennie Hedge founder of the campaign

In January 2019 Southwark Council gave itself planning permission to fell two mature, healthy oak trees growing close to the footbridge on Cox’s Walk. This is a footpath running from Dulwich Common on the South Circular A205 to Sydenham Hill, and leading to Dulwich and Sydenham Hill Woods, a conservation area of ancient woodland. The trees are growing in the Sydenham Hill Wood nature reserve managed by London Wildlife Trust (LWT), whose objections to the planning application were overruled (although 14 young oaks were planted as compensation – 2 of which have already died). The Council argued that essential repairs to the footbridge could not be carried out with the trees in place. The public consultation over the removal of these trees was held for two weeks over Christmas 2018.

The loss of these two trees seemed to many of us who love these woods, a high and probably unnecessary price to pay for repairs to the bridge. The trees have a value of over £240,000 as assessed by the Capital Asset Value of Amenity Trees (CAVAT). Their value as wildlife habitats and for carbon sequestration would take many decades for the young trees to replicate. The footbridge was originally built in 1865 to cross the High Level Railway to Crystal Palace, and although repaired and rebuilt many times, retains its main historic features. The railway is long gone and the cutting is now part of the LWT nature reserve. We started a petition, asking the Council to reconsider and to look for alternative repairs that would retain the trees. The petition has over 2,800 signatures.

Recognising the strength of public opinion against felling the trees, the Council obtained two design proposals from its consultants that would repair the bridge and retain the trees. However, it still concluded that they were too expensive and risky, and is currently persisting with its original plan. But Highways has said that it is open to other proposals, and this is what we have the opportunity to present to them now.

"Temporary halt on felling the trees!!
"Tweet from Helen Hayes MP today:
"'Pleased to say that following further discussion and representations from me, @CatherineRose6 & @AndySimmons10 Southwark Council has agreed to halt the decision to fell two oak trees in Sydenham Hill Woods so that further options can be explored & community engagement take place'."[4]

The independent engineer volunteered his time to produce the outline proposals for the bridge repair. However, more detailed design work is needed to get the proposal to the stage where we can present it to the Council, and we need to recompense him for the time he would need to do this. We also need a full report from the arboriculturist to present as evidence that retaining the trees would not pose a risk to either the work or the trees themselves.

As well as the petition, which showed the strength of local feeling in favour of retaining the trees, we have also conducted a Survey on how people used Cox’s Walk and the footbridge, and their preferences for its future (the bridge was shut in January because some non-structural timbers supporting the parapet were rotten). This clearly showed that keeping the trees was of paramount importance to over 90% of respondees. Keeping the historic design of the bridge was also important to many. The design we are now proposing achieves both.[5] 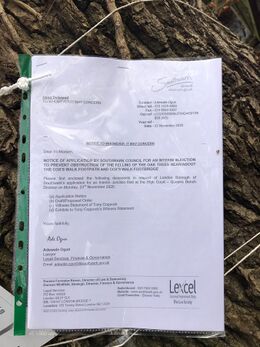 Campaigners "could face jail or fines"

On 23 November 2020, Southwark Council applied to the High Court for an interim injunction to stop campaigners blocking its plans to fell the two oak trees. If the High Court approves the injunction and the campaigners are found in breach of it, they could face jail or fines.[6] A notice of the application, which has been tied to the trees, reads:

Please find enclosed the following documents in respect of London Borough of Southwark's application for an Interim Injunction filed at the High Court – Queens Bench Division on Monday, 23rd November 2020.

We have this week emailed the Council to ask for the rotten timbers on the bridge to be removed immediately, so that the bridge can be reopened. This would be a temporary measure that would allow time for them to work with us for a cost-effective repair that retains the oaks, keeps the bridge and reinstates the timber superstructure.

We had hoped that the Council would engage with us sooner to work our design to construction detail in the most cost-effective way and enable all the repairs to be completed this winter. However, as it is now five weeks since the meeting on 22nd September and we are still awaiting responses to our questions and comments, it is clear that this is not going to happen. Added to that, Councillors have told us that the Southwark Highways network is principally funded by Transport for London, which has well publicised financial problems. Is this the moment to be spending over a quarter of a million pounds on a woodland footbridge?

What we are proposing is a temporary solution that would allow the footbridge to open again and also allow time for the best possible design to be worked out, which could be implemented once the financial situation has improved.

Re-opening the footbridge is obviously important for users, particularly with winter coming on and the paths through the woods becoming extremely muddy – already the case after all this rain! It is also vital for the health of the London Wildlife Trust Sydenham Hill Nature Reserve because of the impact trampling has had since the footbridge was closed, and particularly during the lockdown.[8]

The Council intends to go ahead and cut down the trees, week commencing 16th November. We have one more week to Save the Oaks.

Cutting them down is not inevitable. 'Every effort' has not been made. It is Southwark Council's active choice to cut them down. There are alternatives.

If you're a Southwark resident and want to help, please contact your MP and local councillor to ask for the felling to be stopped and the Highways officers to work with us to produce a cost effective, sustainable repair to the footbridge that keeps the trees.[9] 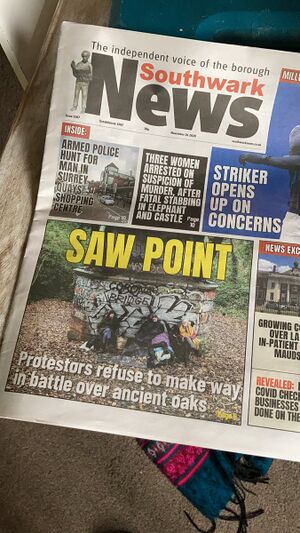 @SouthwarkLabour time to remember your No 1 Fairer Future promise? Thank you @SaveOaks[10]

And on 26 November 2020 Claire Sheppard, the Green Party candidate for Southwark and Lambeth in next year’s postponed London Assembly elections, tweeted:

Thousands of people stand with @SaveOaks
Thank you @Southwark_News for giving @lb_southwark yet another opportunity to change their minds.
Come on! 2020s been rubbish, don’t end it killing these ancient trees![11]

“I’m completely behind saving these ancient trees in this ancient woodland.

“I think it’s entirely possible that this bridge can be mended without causing destruction to these beautiful ancient trees, and I think Southwark Council should be doing everything that they can, given the climate emergency, to ensure that these trees can be protected.

“And our children’s future depends on us keeping old and ancient trees, not needlessly destroying them.”

Thousands of people have backed a campaign to save two oak trees in a nature reserve in South East London. Southwark Council says there’s no alternative but to cut them down so safety repairs can be made to a historic footbridge in Sydenham Hill Woods.

[black box with image of bat on it]

Clumps of bamboo or hidden ruins are remnants of the Victorian gardens and villas long demolished. And this decaying footbridge, part of Cox’s Walk, was once over the Nunhead to Crystal Palace railway line. A campaign group is camped out to save two oak trees due to be felled in order to fix the bridge.

Ellie, one of the campaigners, says:

“They are chopping trees everywhere. Everywhere trees are going down and we say no, you start only with two, but it’s only the beginning and then it could be something else and something else. This is a nature reserve. I mean, it just doesn’t make sense.”

Local people have offered support more than 4,400 signing a Save the Oaks petition.

Campaigners have even crowd-funded an alternative design by engineers, conservationists and tree experts.

Pennie Hedge, founder of the campaign:

“We had a good team. But the Council just sort of went ‘yeah’ and dismissed it. Why not remove the timbers now and just put in a temporary balustrade and then sit down and work with us and come up with the most cost effective way of implementing our design. You know we just keep saying to them ‘please talk to us’.”

“Every effort has been made to try and find a way to save this pair of oaks, maintain a safe route through the woodland and repair our historic footbridge. But no viable, affordable, alternative solution has been identified that will achieve all three objectives, in the time needed.” Cllr Catherine Rose (Leisure, Environment and Roads)

They say they will plant more trees, but for now the stand-off continues in the woodland. And, while with everything else going on, efforts to save two oak trees might seem inconsequential, perhaps local campaigns like this are an antidote to some of the powerlessness many of us feel.

On 23 November 2020, Vanessa Feltz on BBC Radio London devoted a 12-minute piece (35:38 to 47:56) on the Save The Footbridge Oaks campaign. Reporter Barry Caffrey was in Sydenham Hill Woods and spoke to campaign organiser Pennie Hedge as well as to Angelica, a protestor, who argued that the oak trees should not be removed.

At 42:28 in the recording, Vanessa Feltz interviewed Cllr Catherine Rose who explained that Southwark Council anticipates it will cost some £200,000 to restore the footbridge. Cllr Rose said:

“We have taken two years to explore other options, but, much as it saddens us, no viable alternative to our current plans has presented itself.
“We now need to safely complete repairs to the bridge, reopen the footpath and again make Cox’s Walk accessible to all.”[14]