Stephan Kock was a deep politician in the UK deep state with connections to arms deals such as the Arms-to-Iraq deal.

Even the British Parliamentary Committee that looked into weapons deals in the wake of the Scott inquiry failed to positively identify Kock's birthplace. Some researchers maintain he was born in the same village as former media mogul Robert Maxwell.[citation needed] His own account of his career states he underwent active service in the SAS as well as having intelligence connections - and an inside track to the highest levels of the British government. 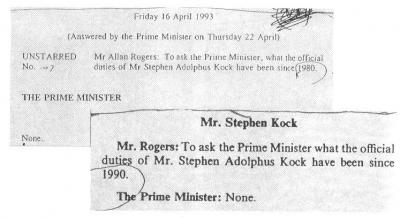 Stephan Kock had extensive covert involvement in the Arms to Iraq affair and with companies implicated in the associated exports. There were a number of cryptic questions to ministers about his connections to government and the security services through the 1990's, none of which - as is usual in these cases - received a substantial reply.

A typical example occurred on Friday 16 April 1993. Allan Rogers MP had tabled a question to the UK Prime Minister John Major. The question was published on the House of Commons order paper as " ...to ask the Prime Minister, what the official duties of Mr Stephan Adolphus Kock have been "since 1980".

The Prime minister answered with one word "None".

However, the official record of the proceeding contained in Hansard records the questions as: "...to ask the Prime Minister, what the official duties of Mr Stephan Adolphus Kock have been since 1990". [1]

Replying to a further question from Michael Meacher MP, which clearly assumed the previous answer related to the period intended in the previous question - ie 'since 1980, John Major said:

“Mr Kock performed no official duties for any government department during the period 1964-79. It remains the government policy not to comment on the contacts which any individual may or may not have had with the Security and Intelligence Services.”
Stephan Adolphus Kock (24 May 1994)  [2]

In other words, we are assured that Kock had no "official duties" between 1964 and 1979 or from 1990 to the date of the question - which neatly sidesteps the central period of interest (1980-90) coinciding as it does with the entire Arms to Iraq affair. It is a small but telling illustration of deep political dissembling; since outright lies to Parliament are potentially risky, the daily order papers not forming part of any official record and quickly discarded, the official record is doctored accordingly.[3]

All our main companies were involved with Space Research Corporation (“SRC”) and the late Dr Gerald Bull who was behind the Supergun and other secret projects which Astra companies were also involved in. In 1989 I realised we had a hugely dangerous individual on our main Board and the BMARC Board who was an MI6 agent. This individual, Stephanus Adolphus Kock had high level political connections to Thatcher, Heseltine, Younger, Hanley, etc as well as MI5 and MI6 connections.

It is now clear to me that he was involved in the murder of Dr Gerald Bull in Brussels on 22nd march 1990 and Jonathan Moyle in Santiago, Chile on 31st March 1990. BMARC was the only company outside the Atomic Weapons research Establishment and Government Arms depots with the capability to store nuclear bombs like Redbeard and WE177.

Gerald James says that, following his expulsion from the Chairmanship of Astra, he undertook research on Kock whom he alleges was instrumental in the deliberate sabotage and demise of the company. In addition to learning of Kock’s intimate association with former UK Prime Minister Margaret Thatcher, he also discovered that Kock "in his more active days, had been head of Group 13." He adds, "The Foreign Office is said to draw Group 13 operatives from the SAS as well as from private security firms," and that, "Its duties involve ‘service to the nation.’" [4]

Stephan Kock was heavily involved in the Pergau Dam affair.[5]