Document:Why I wear a white poppy 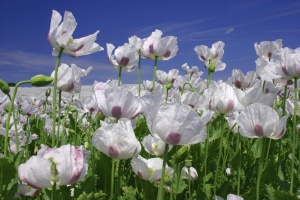 Why I wear a white poppy 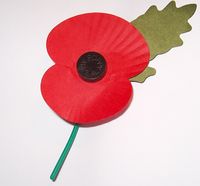 The first use of the red poppy in the UK was in response to popular demands for a national commemoration of the wanton slaughter of infantry soldiers in the first world war. Slogans often employed at these Armistice Day ceremonies were The war to end war and Never again!, but the outbreak of the second world war - effectively the continuation of hostilities following the armistice agreement 21 years earlier - together with a never-ending series of smaller wars and military involvements ever since, appear to have comprehensively dashed all such hope.

World war 1 was the last war in which military casualties far outnumbered those of civilians in most combatant nations. Since then warfare casualty statistics have comprehensively reversed - and on a vast scale – such that it is now civilians who comprise the overwhelming majority of the casualties of modern wars – regrettable collateral damage is the sanitising euphemism most often used to describe them but commemoration of their tragedy is specifically excluded from UK Remembrance Day which is for the military only. 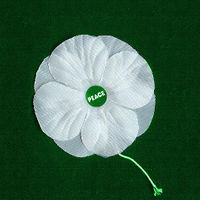 The first use of the white poppy was in 1933 in reaction, even then, to the jingoistic celebrations and militarism that had started to creep into the Armistice Day commemorations, most notably in the form of so called victory balls bedecked with red poppies and held on Armistice Day. Its purpose was and remains to commemorate the unspeakable horrors of war and to remember ALL of its victims, military and civilian, with the two world wars still its most egregious examples. Can anyone seriously believe that there were any substantial differences between the motivations and behaviours of the average British 'Tommy' and his German counterpart? Or that innocent German (and Japanese) civilians, incinerated in their hundreds of thousands as deliberate acts of Allied war policy, are any less worthy of remembrance than the relatively tiny number of their UK counterparts? - though neither UK nor German civilian war dead are the subject of national remembrance ceremonies in their own countries.

There are undoubtedly many people - most notably the families of military personnel killed or seriously injured in latter-day conflicts - who find genuine comfort and consolation in the Remembrance Day services of the early 2,000's. But for the mass of the population these events have become little more than BBC/mass-media extravaganzas replete with marching bands, and solemn-faced politicians parading their sorrow. As the successors of those whose abject failures unleashed two world wars and whose career ambitions – with honourable exceptions - now require at least acquiescence in the UK's modern military interventions, they would be more convincing were they to wear sack-cloth and ashes rather than 'sunday-best-complete-with-medals-and-obligatory-red-poppy'. Far from genuine commemorations of the horrors of war, these events have become little more than solemn apologias for militarism no matter the morally dubious nature of most UK military campaigns both past and present.

Such objections, it is argued, are mitigated, at least in part, by Red Poppy Appeal monies helping to finance a good and worthy cause. That is as may be, but should soldiers sent to risk their lives for State purposes really have to rely on charity for decent housing and medical care when they return injured and traumatised?

As for ubiquitous use of the designation 'Heroes': whilst acts of selfless heroism have always been a part of warfare, a far more honest and accurate description of the masses of military dead and injured – and especially the 'poor bloody infantry' of the first world war – is 'Victims'; Victims of the designs of largely evil men who rarely put themselves at any physical risk but lecture all-and-sundry while sending others to their fate.

As the late Harry Patch, then one of the oldest surviving veterans of the WWI trenches, opined shortly before his death in 2009 at the age of 111: “Politicians who took us to war should have been given the guns and told to settle their differences themselves, instead of organizing nothing better than legalized mass murder.”