Psilocybin is a drug which is naturally produced in over 200 different species of mushrooms. It is well safe for human consumption and has achieved promising results in tackling treatment resistant depression. Its illegality hampers research, as does the fact that since it is naturally occurring, it does not fit the patentable model of big pharma.[1]

The drug produces a psychedelic intoxication similar to those of LSD, lasting for a number of hours. It has minimal physical effects on the body.

The drug has been found to have beneficial effects on mental health.[2] Researchers from investigators at the University of Alabama at Birmingham published research in 2017 that suggested that psilocybin use was associated with a decreased likelihood of antisocial criminal behavior.[3]

In 2018, the FDA approved a trial about the anti-depressant potential of psilocybin.[4] "A 2016 Johns Hopkins University study of 51 patients with life-threatening cancer showed high doses of psilocybin significantly reduced end-of-life depression and anxiety for six months in 80% of cases, and helped patients accept death."[5] 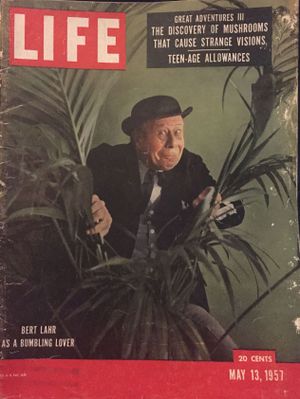 In 1953, Gordon Wasson, a New York banker, experienced a "mushroom velada" — a psychoactive ritual in Oaxaca, Mexico. This lead to a 1957 article on the ceremony in Life magazine. Albert Hoffman analysed samples taken by Wasson and in 1958 isolated psilocybin.[6]

The legal status of mushrooms containing psilocybin varies and is often different for fresh mushrooms and for prepared mushrooms (sometimes just drying may count as criminal preparation). Some counties have de facto decriminalised mushrooms by failing to enforce the law.

In May 2019, Denver legalised them after a narrow referendum.[7] Oakland followed suit, becoming the second US city to decriminalise psilocybin in June 2019.[5][8]