A pronunciamiento ("proclamation , announcement or declaration") is a form of military rebellion or coup d'état particularly associated with Spain, Portugal and Latin America, especially in the 19th century. 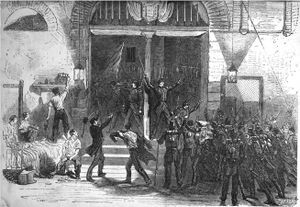 The pronunciamiento is one category of praetorianism: the practice of military figures acting as political actors in their own right, rather than as the politically-neutral instrument of civilian government.

In a classic coup d'état a rebel faction which controls some critical element of the armed forces seizes control of the state by a sudden movement, organized and executed in stealth.

A pronunciamiento, in contrast, is by definition a public performance designed to rally public opinion to a dissident faction. A group of military officers, often mid-ranking, publicly declare their opposition to the current government (head of state and/or cabinet, who may be legally elected civilians or the result of a previous coup).

Pronunciamientos are normally 'bloodless' or close to it, intending to bring about a change in government or regime by threatening violence and publicly demonstrating the lack of support for a given government, rather than the swift actual violence of a normal coup.

The goal may be, as in the classic coup, to install one of the military rebels in power. But more often its aim is to tip the balance of public opinion so that a favoured prominent civilian opposition leader might called to form a government.

Stanley Payne characterises the pronunciamiento, in contrast to the "classic military coup", thus:

"The pronunciamiento was sometimes oblique and indirect, consisting of no more than strong statements, encouragements, or threats by powerful generals intended to influence the government's policy. However, the most spectacular and important pronunciamientos were those that involved some form of force. Ordinarily, the armed pronunciamiento was a revolt by one section of the Army –sometimes a very small section– which raised the flag of rebellion in its district and hoped that its example would lead other units to rally round, or would at least break the government's nerve"[1]

Generally, a pronunciamento originated with a small number of officers motivated by fear of the current government's persecution of political dissidents, or of its perceived inability to resist invasion or revolution. This small group would then spend a preparatory period "sounding out" the larger community of officers to determine if their views are widely shared. After the pronunciamiento the would-be rebel officers then wait for the rest of the armed forces to declare for or against the government.[2]

There is no fighting at this point; if the rebellion has no support the organizers lose. They may have to flee the country or retire from the armed forces, or they may be arrested, and typically they would face a lenient fate. If the bulk of the armed forces declare in favor of the pronunciamiento the government resigns. It is similar to a vote of no-confidence, except that it is issued by the armed forces, not by the legislature.

The origins of the pronunciamiento lie in the Spanish and Portuguese resistance to Napoleonic rule. The Napoleonic Wars created the conditions for the intervention of the military in a plebiscitary act of 'no-confidence' on the presumed behalf of the nation. The wars had brought together large groups of ordinary men from all across a given state, while at the same time exposing them en masse to political ideas. Conscription to fight a foreign occupier or invader had the effect of subjecting individuals from different corners of the multiethnic dynastic state to similar experiences, generating a practical sense of belonging to one same 'nation'.[3][4]

After brief experiences of democratic government and constitutional liberties, 1814-15 saw the restoration of absolute monarchy under dynastic houses such as the Bourbons or Habsburgs. This gave rise to the sentiment that the conscript army of citizen-soldiers (see Levée en masse and Milicia Nacional) was a truer expression of the people and the nation than the monarchs themselves, paving the way for elements within the army to take politics into their own hands.

This process in Spain has been compared to the experience of France during the same period: from Bonaparte's own military-backed coup of 1799, to the participation of liberal generals Lafayette, Gérard and Mouton in the 1830 overthrow of the Bourbon Restoration.[5]

The pronunciamiento was also used under parliamentary regimes where the legislature had split into many micro-factions, rendering it impossible for the government to identify the public mood. Elements within the army might then intervene as a 'referendum' to influence parliament or government towards a desired direction.

In Spain, the principle of a segment of the military intervening in politics through a plebiscitary gesture had been generated by the national mass mobilisation of the War of Independence against Bonapartist France. Subsequently, the restoration of the absolute monarchy prompted the liberal General Riego to mount a military rising in 1820, demanding the restoration of the Constitution of 1812. For the next half-century a cycle of military interventions, both pronunciamientos and classic coup d'états, would occur whenever Spain entered a deadlocked political crisis. Intervention could come from generals associated with the Radical-democratic left (Prim), the Liberal centre-left (Espartero), the conservative-liberal centre(O'Donnell) or the Conservative-liberal right (Narváez, Martínez Campos). This particular fifty-year cycle came to a fifty-year close with the Bourbon Restoration of 1874.[6]

Outside of the Spanish and Portuguese speaking world, events that have been termed a "pronunciamiento" include:

This page imported content from Wikipedia on 01 January 2021.
Wikipedia is not affiliated with Wikispooks.   Original page source here
Retrieved from "https://wikispooks.com/w/index.php?title=Pronunciamiento&oldid=200265"
Categories: