"Post-Truth" describes the modern tenuous relationship to objective reality that many feel. The term emerged around 2016. 10 Days after

“Reality is under assault. Verbal confusion reigns. Truth and illusion have merged. Mental chaos makes it hard to fathom what is happening. We feel trapped in a hall of mirrors. Exposed lies are answered with other lies. The rational is countered with the irrational. Cognitive dissonance prevails. We endure a disquieting shame and even guilt. Tens of millions of Americans, especially women, undocumented workers, Muslims and African-Americans, suffer the acute anxiety of being pursued by a predator. All this is by design. Demagogues always infect the governed with their own psychosis.”
Chris Hedges (30 January 2017) [citation needed]

The term was added to the Oxford English dictionary in 2016. The entry is as follows:

Relating to or denoting circumstances in which objective facts are less influential in shaping public opinion than appeals to emotion and personal belief:

"in this era of post-truth politics, it's easy to cherry-pick data and come to whatever conclusion you desire"
"some commentators have observed that we are living in a post-truth age" [1] 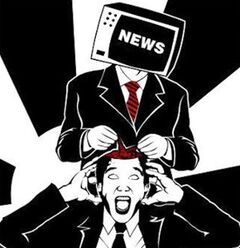 Corporate controlled media (whether social or otherwise) is often criticised for acting as a medium of propaganda. More subtly, it also acts — to the declining extent that it garners public attention — as a medium of setting the agenda.[2] Craig Murray clarified in 2016 that the "Mainstream media is not post-truth. It never had any connection to the truth."[3]

The Institute for Statecraft is a group suffering from permanent war mentality, with an extreme degree of focus on "Russian Propaganda". A Leaked document by Euan Grant documented his interest in “making use of fictional work for reinforcing messages about Russian hybrid warfare” [4]. The group has also defined "disinformation" to include only what the Kremlin does.