Pedro Baños Bajo is a Spanish soldier, colonel of the Spanish Army (infantry) and a specialist in geostrategy, defense, security and jihadist "terrorism". He was scheduled to become Director of the Spanish Department of Homeland Security but after the Integrity Initiative determined that he was too "pro-Krelim" they engaged in intense lobbying against him and 6 days later the job was given instead to Miguel Ángel Ballesteros[1]. Shortly thereafter, his publisher withdrew support for his book and pulped undistributed stocks of both its Spanish and English editions. [2]

After leaving the military academy in 1985, as lieutenant and captain he commanded different units in the garrisons of Burgos, Bilbao, Almería and Toledo. For three years, he was Head of Counterintelligence and Security of the European Army in Strasbourg. From 2004 to 2010 he served as Professor of Strategy and International Relations at the High School of the Armed Forces. From 2010 to 2012 he was assigned to the Strategic Affairs and Security Division of the General Secretariat for Defense Policy, as head of the Geopolitical Analysis Area, and in 2012 he moved to stand-by working later as an analyst and autonomous lecturer.

He has collaborated at the European Parliament headquarters in Brussels as a military adviser and has participated in three missions in Bosnia-Herzegovina (UNPROFOR, SFOR and EUFOR). 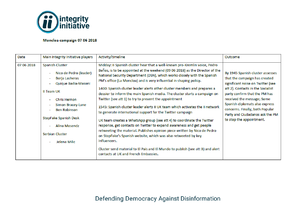 A document leaked in November 2018 from the Integrity Initiative, detailing their Operation Moncloa.

On June 7, 2018 it was announced[citation needed] that Baños would be made Director of the Spanish Department of Homeland Security. However, this came to the attention of the Spanish Cluster of the Integrity Initiative. Having labelled him a "well known pro-Kremlin voice" they began a campaign of lobbying against the appointment, preparing a dossier to give to the main Spanish media and organising a multiplicity of apparently independent objects on Twitter. Six days later the Spanish Prime Minister Pedro Sánchez opted instead to appoint Miguel Ángel Ballesteros. 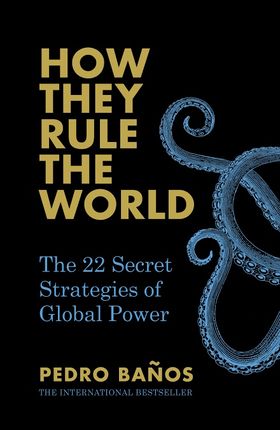 According to The Guardian the book publisher received complaints alleging the book was "antisemitic"[3] An initial internal investigation found no problem with it. This led author Jeremy Duns and the Campaign Against Antisemitism to question why certain passages in the Spanish edition had been omitted from the English edition. This led to an "independent external review" run by Jewish Rabbi and House of Lords member, Julia Neuberger which found “echoes of Jewish conspiracy theories in certain passages and references” in the Spanish-language edition. This in turn led the publisher to suspend support for the book in both its Spanish and English editions. [3]

The offending passages in the Spanish edition deal largely with the vast power wielded, both historically and contemporaneously, by the Rothschild banking dynasty primarily through the City of London. Removal of them for the English edition can thus be seen, prima facie, as further evidence of that power, since to talk of Jewish power, whether collective or individual, remains a rigidly enforced public discourse taboo in the English-speaking world and will naturally result in precisely this sort of censorship. The fact that Alexander Solzhenitsyn's historical tour de force 200 Years Together, has been unable to find an English publisher nearly 20 years after first appearing in Russian German and French, is likewise prima facie evidence of Jewish power

Penguin Random House are naturally tight-lipped about the matter.