Operation Blackout was a 2019 exercise simulating sabotage of civilian infrastructure, "terrorism" and psychological operations against American citizens on the day of the US 2020 Election. The private U.S.-based, Israeli-founded company Cybereason organized it with members of the DHS, FBI and the U.S. Secret Service, and also the law firm Venable.[1]

In addition, it is funded by and partnered with top U.S. weapons manufacturer and government contractor Lockheed Martin and financial institutions with clear and direct ties to Saudi Crown Prince Mohammed bin Salman and White House adviser and the president’s son-in-law Jared Kushner. Cybereason’s CEO, Lior Div, has openly admitted that he views his work at Cybereason as a “continuation” of his service to Israel’s intelligence apparatus.[3]

The Israeli company Cybereason has discreetly become a major software provider to the U.S. government and military through its direct partnership with Lockheed Martin, which followed the defense company’s decision to open an office at the Israeli military’s new cyber operations hub in the Negev desert. 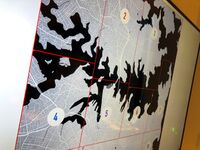 The opposing teams were supervised by a “white team” composed of members of Cybereason’s staff and Ari Schwartz — a former member of the White House’s National Security Council and the National Institute of Standards and Technology(NIST)[5] — who set the rules of the simulation and would ultimately decide its outcome. Schwartz also used to work for the Center for Democracy and Technology (CDT), a major backer of Microsoft’s ElectionGuard software.[6]

The Red Team implemented "a fantastic set of moves that demonstrated daring and creativity", including "Autonomous vehicles were leveraged...to wreak havoc at polling stations and cause many deaths and injuries" (how this is in any way "ethical hacking" is left unexplained).

The Red Team also used false flag operations and psychological warfare. When the Read Team "crash autonomous buses and cars into the polling lines and polling locations", the team makes ISIS (a group not without ties to Israeli intelligence[7]) claim responsibility.

In addition "Deep fakes were used by the Red Team to impersonate the superiors of pollsters and law enforcement officers and direct them to execute actions that benefited the Red Team. Deep fakes were used to create fake videos and spread misinformation about the candidates in the race. Accounts of media "influencers"were hacked

Telecom networks and news outlets within the fictitious states were also hacked and flooded with deepfakes aimed at spreading disinformation and panic among U.S. citizens.

However, in a somewhat curious conclusion (undermine, but not cancel), "the primary mission of the Red Team failed due to overkill. Instead of undermining the election, they forced the Blue Team to cancel the election and they caused a terrorist attack".

Communications are the New Battleground

The exercise concluded that "having clear channels of information or disinformation was very important for affecting public sentiment for both sides, including "Control of social media networks for journalists, influencers, and political figures that allowed the Red Team to easily spread misinformation through supposedly “legitimate” channels.

The exercise explicitly excluded hacking election equipment from consideration to focus instead on everything else in the electoral system.

Cybereason and unnamed former members of the British Government and the Metropolitan Police repeated this on December 11 2019, in Operation Blackout London. This time it was a fictitious UK city, Adversaria.

"Both teams performed well, and they deployed a number of tactics and techniques throughout Operation Blackout London. However, in the end, the Red Team wasn't able to achieve its goals, and the Blue Team scored a clear victory because they were able to maintain its goals of limiting disruptions and maintaining normalcy and open and free elections. With many excellent former government and law enforcement experts on my team, we were able to counter Red's moves and maintain public trust," said Alessandro Telami, senior director at Cybereason. and Operation Blackout London Blue Team Leader[8]