Nano-thermite or super-thermite is an explosive which was found in the dust of the World Trade Center after September 11th, 2001. It can be ignited at around 450°C. In 2001, nanothermite was a cutting edge technology to which Stratesec had access, as well as having access to the building. 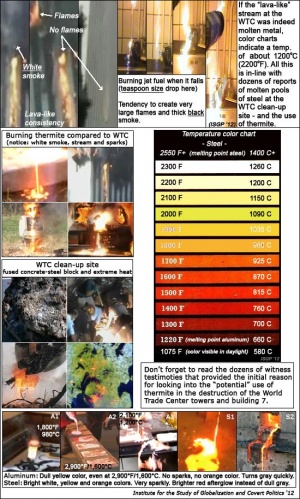 Academic research suggests that nano-thermite was used in the demolition of the 9-11 World Trade Center to cut the steel beams, as part of the controlled demolition of the three World Trade Centors.[1] In 2009 a paper was published to this effect, in a peer reviewed journal by an international team of researchers, which provided evidence of nano-thermite in several dust samples from the 2001 attack.[2] Wikipedia's policy on reliability suggests that peer reviewed journals are a reliable source, but they were overridden in this case; the use of nano-thermite was termed a "fringe theory" and the page was censored and even locked to prevent resubmission of such links. As of February 2018, there was no mention of 9-11 on the Wikipedia nano-thermite page.[3], although it was on the talk page.[4] Over 2200 Architects and Engineers have reviewed the paper and the evidence for controlled demolition and are calling for a new investigation.[5]

Supporting evidence for use of explosives includes

Nano-thermite is used by US military as an incendiary weapon. The weapon is labelled under 'Licensable Technologies' by Los Alamos research laboratories.[8]