Dr. Mehmet Cengiz Öz is a Turkish/American celebrity doctor who played a conflicted role during 2020.

In 2003, Oprah Winfrey was the first guest on the Discovery Channel series Second Opinion with Dr. Oz,[1][2] and Oz was a regular guest on The Oprah Winfrey Show, making more than sixty appearances.[1] In 2009, The Dr. Oz Show, a daily television program about medical matters and health, was launched by Winfrey's Harpo Productions and Sony Pictures Television.[3] He is a former cardiothoracic surgeon and a professor emeritus at Columbia.[4]

In March 2020, Oz was following established medical best practice, warning against unthinking 'lockdowns', and recommending hydroxychloroquine, challenged Anthony Fauci to a debate, and offered to fund a clinical trial,[5]. He also criticised locking down of schools[6] but stated in April 2020 that "we are better off waiting for the randomized trials Dr. Fauci has been asking for."[7] 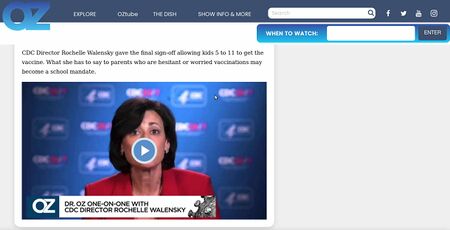 No hard questions from Dr. Oz to Rochelle Walensky in what might have been a scripted piece of PR to tackle "vaccine hesitancy"

He reportedly took a "COVID-19 vaccine", although he reported that his wife and children declined to.[citation needed]