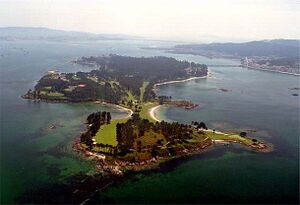 The Island of La Toja, or the Island of the Baths of Loujo is a Spanish island belonging to the province of Pontevedra, in Galicia. The island is located east of the small town of O Grove, to which it is connected by an 18th-century bridge[1]

The 1989 Bilderberg conference meeting was held as the 5-star health spa at the Gran Hotel.

After being bought by businessman Amancio López Seijas[2][3] in 2018, the island is home to the Foro La Toja, an yearly "Atlantic discussion forum" and a "Iberian Davos" created as "a space for dialogue between both sides of the Atlantic". The forum is not meant to be a crowded date, but a benchmark for intellectual and academic debate.[4]

In 1841, a botanist discovered the local spring water made the island ideal for a spa. The owner, known as the Marquess of Riestra, received authorization to open the first Health Spa on la Toja a year later. In 1907 the Gran Hotel de la Toja was opened.[5]

During the Spanish Civil War, Gran Hotel la Toja was converted into a field hospital. Then after the war it became a refuge for those wounded in the conflict. In 1945 there was a restoration, the towers were pulled down and an almost complete refurbishment was done.

Some time later the hospital fell into the hands of Pedro Barrié de la Maza, who tried to breathe new life into the project[5], until his death in 1971. A casino opened in 1978.[6]

Today it is a five star hotel.