Sir John Orr was a Scottish policeman. He was the former Chief Constable of Scotland's largest force Strathclyde Police (1996-2001) having joined the Scottish Police as a Cadet in 1961 at Renfrew and Bute Constabulary. He soon rose through the ranks, becoming a Detective Superintendent in 1984 and was promoted to Detective Chief Superintendent (DCS) in 1987.[1]

DCS John Orr led the UK police investigation into the December 1988 Lockerbie bombing until 1990, when he became deputy and then Chief Constable of Dumfries and Galloway Constabulary.[2]

On 4 January 1989, a memorial service was held at Dryfesdale church attended by more than 700 people including Prime Minister Margaret Thatcher. For the first time in two weeks, military helicopters were not circling over Lockerbie, a concession for the memorial service. But the extensive search of the Scottish countryside, involving 1,500 people, for debris, clues and remains will continue indefinitely, Detective Chief Superintendent John Orr said:

"There is an awful lot of hard work that will have to be done in the course of the next weeks and months."[3]

According to Lockerbie commentator Barry Walker:

It is the official version of events that the primary suitcase arrived at Heathrow on flight Pan Am 103A from Frankfurt and that the primary suitcase began its journey at Luqa Airport although there is no actual evidence that it did. The Trial Judges deduced that it must have because Mr al-Megrahi was on Malta that day. Early in the investigation, in January 1989, the Senior Investigating Officer Chief Superintendent John Orr had "eliminated" Heathrow as the point at which the primary suitcase was introduced although he was in possession of no actual evidence on which do so. Indeed it is quite possible that neither Orr, nor any member of his team actually went to Heathrow. This "elimination" was based on cod logic as to the position of the primary suitcase within container AVE4041.[4] In "eliminating" Heathrow in this way, John Orr lost any opportunity to legitimately solve the case.

John Orr's deduction was put as a submission to the Fatal Accident Inquiry by the Lord Advocate's Deputy and Successor Andrew Hardie QC. No evidence was presented to support this submission. Much later the Trial Judges expressly repudiated this deduction, speculating, again without evidence, that the brown Samsonite that had mysteriously appeared in AVE4041 had been moved "out of harm's way." The central flaw in the prosecution case was that this suitcase was never recovered (unless it was in fact the primary suitcase) and was never linked to any passenger aboard Pan Am 103. The question of which airport the bomb was introduced was crucial to how the bomb was powered and detonated and therefore who actually carried out the bombing. The late Mr al-Megrahi's proven presence in Malta on 21 December 1988 provides him with a cast iron alibi. 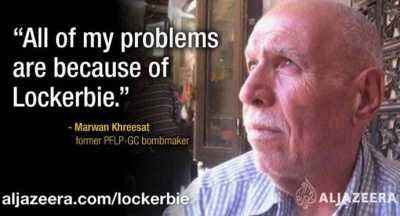 The initial suspects in the case were the PFLP-GC Autumn Leaves group whose bomb-maker Marwan Khreesat had built the bombs in two earlier aircraft bombings. One or more samples of Khreesat's handiwork were recovered in Neuss. Khreesat's bombs incorporated a barometric timer and were designed only to explode at altitude. The "official" Lockerbie scenario is that the bomb had already travelled on two planes in its journey from Malta to Heathrow (via Frankfurt). While John Orr and his team initially had a lengthy spat with the German authorities, and commissioned a report from RARDE arguing that a Khreesat "barometric" bomb could have survived the journey from Frankfurt (implying that the actual target was flight Pan Am 103A) these claims were eventually abandoned. However to "prove" the official scenario it was necessary to prove that Marwan Khreesat was not the bomb-maker and that the bomb was detonated with a timer which was (supposedly) set before the primary suitcase was smuggled aboard at Luqa. This scenario was assisted by an interview granted to two FBI agents Edward Marshman and the disgraced Tom Thurman with Khreesat himself in Jordan on the 12th and 13th November 1989 where he was under the protection of the Jordanian Intelligence Services (with which the CIA are closely allied). In this self-serving "statement" (as represented by Mr Marshman) Khreesat denied having ever built a bomb in a twin speaker radio-cassette recorder. It was the discovery of PT/35(b) on 12 May 1989 that "proved" the Lockerbie bomb was contained within a twin speaker radio cassette. However he was certainly connected with IEDs built in Toshiba radio-cassettes and in particular a single speaker Toshiba bombeat radio cassette.[5]

The Scottish Police were excluded from this interview and they never spoke to the man who was initially their prime suspect. (Curiously neither Megrahi's nor Fhimah's defence team named Khreesat in the special defence and Khreesat's hearsay account was admitted unchallenged.)[6]

In 2001, Sir John Orr was knighted by the Queen for his services to Scottish Policing.[7]

In 2005 Sir John reported on his "Review of Marches and Parades in Scotland" which was to be formalised through the Scottish Parliament to provide a framework for legal protocols of marches and parades within Scotland.[8]

This page imported content from Wikipedia on 5 August 2013.
Wikipedia is not affiliated with Wikispooks.   Original page source here
Retrieved from "https://wikispooks.com/w/index.php?title=John_Orr&oldid=158739"
Categories: