URIs of the form "#" are not allowed.

John Morgan was an investigative journalist and author. He wrote a series of books on the definitive in depth research and analysis of over 10,000 files taken from the Princess Diana death inquest and the official report and findings on such, ‘The Paget Report’. Morgan concludes that the fatal 1997 Paris crash was orchestrated by agents of the British state. Due to failing health, he began to collaborate with British investigative journalist Laurence de Mello on his last book about the Diana Inquest series.

John Morgan was born in Rotorua, New Zealand in 1957, and lived in Australia for over 25 years. He lived with his wife Lana in Redcliffe, on the shores of Moreton Bay, near Brisbane. With a degree in journalism from the Australian College of Journalism, he completed his first book titled Flying Free in 2005 – about life inside a cult.

Research into the Death of Diana

In 2005 Morgan began full-time research into the events surrounding the untimely deaths of Diana, Princess of Wales and Dodi al Fayed. After studying The Paget Report on its publication in December 2006, he was shocked by its content. He realised that the £4 million report which took three years to produce was littered with inaccuracies and poorly drawn conclusions — Morgan viewed it as a huge injustice to the memory of Princess Diana. The 2007 book, Cover-up of a Royal Murder, was the result of his subsequent investigation into the Paget report. Morgan went on to closely follow and analyse the proceedings and transcripts of the London inquest into the deaths of Princess Diana and Dodi Fayed. The Diana Inquest series of books is the result of his thorough research and investigation into that process.

The Paget Report was the basis for Morgan’s research. It is the official summary of the criminal investigation findings, which includes witness statements and testimonies with regards to the fatal crash dynamics pre and post the event.

The criminal investigation was initiated by Egyptian billionaire Mohamed Al Fayed, the father of one of the victims, after he made criminal allegations to the British police of a conspiracy to murder Diana, Princess of Wales and his son Dodi al Fayed. The Criminal investigation into the dynamics of The 1997 Paris crash, which killed Princess Diana, her lover Dodi al Fayed and their French driver Henri Paul, was concluded almost ten years later, after a series of lengthy and inexplicable delays.

The coroner remarked at the opening of the inquests, 6 January 2004,

"This police report documents the findings of the criminal investigation into an allegation made by Mohamed Al Fayed of conspiracy to murder the Princess of Wales and his son Dodi Al Fayed. The Coroner of the Queen’s Household and H.M. Coroner for Surrey, Michael Burgess, also requested this investigation by the Metropolitan Police Service (MPS) to help him decide whether such matters would fall within the scope of the investigation carried out at the inquests."[1]

"When I said I accepted the verdicts of 'Unlawful Killing' following the inquests into the deaths of Princess Diana and Dodi, I was hoping that in time new information would be revealed. I believe that John Morgan has done more to expose the facts of this case than the police in France and Britain. He has shown how vital evidence was suppressed or simply hidden from the jury, how witnesses were either not heard at all or not asked the right questions and how the so-called investigators were more interested in covering up what really happened than honestly delving for the truth. The fact that he carried out his epic work at [a time] when he is in very poor health is nothing less than heroic. I salute John Morgan and I thank him. He has performed a service to anyone in the world who cared and continues to care about Princess Diana and my son."

Michael Mansfield, QC, who served as the main attorney for Mohamed al Fayed throughout the six months of the Diana inquest in 2007-8 said of Morgan:

"I have read all of the books that John Morgan has produced.

During the inquests ... I referred to the books that he had then published. Others have come out since. All of John Morgan’s books are packed with the most incredible detail and the most careful analysis. He picks up the points that other authors have missed. He reaches compelling conclusions and offers telling comments. Of all the many books written about this case, Mr. Morgan’s are by far the most detailed and analytical. His singular devotion to his subject is extraordinary and, I think, an object lesson to other authors who have produced books based upon this terrible tragedy. I have no doubt that the volumes written by John Morgan will come to be regarded as the ‘Magnum Opus’ on the crash in the tunnel that resulted in the unlawful killing of Diana, Princess of Wales and Dodi Al Fayed and the cover-up that followed

I give all credit to Mr. Morgan for the work that he’s done, because no one has examined this case as thoroughly as he has. The fact that he has done so when he is suffering from serious illness makes his achievement all the more remarkable."

"John Morgan's books lift the lid on the biggest scandal of our age. His perceptive forensic analysis of Princess Diana's death reveal an orchestrated cover up by the British Establishment, including powerful members of the judiciary, police, Labour Government politicians and intelligence services. He shows that it was not a car accident caused by a drunken chauffeur that killed the Royal icon: Diana was murdered in a clever plot to stop her marrying the playboy son of a Muslim shop-keeper. As mother of William, the future King and head of the Church of England, she had to be stopped. And Morgan shows us how they did it, and then tried to hide the truth from the world - until he came along."

John’s work also inspired CEC Research Director Robert Barwick’s article, “British Royals Feel Heat over Diana’s Assassination and Charles’s Saudi Ties”, published in the 11 February 2015 Australian Alert Service and 13 February 2015 Executive Intelligence Review. The CEC staff "extend their heartfelt appreciation to John and Lana for their dedication to their mission, in the face of immense physical hardship". As he stated in his summary volume, “Paris-London Connection: The Assassination of Princess Diana”, which he issued in 2012 based upon seven earlier volumes, “That power rested in the head of the royal family, the Queen. Only she could authorise the assassination of the most famous and photographed person in the world, the mother of the future King of England, the increasingly powerful Princess Diana.” [2]

A series of investigative volumes that analyse the evidence around all the major issues relating to the deaths of Princess Diana and Dodi FayedThe John Morgan Inquest series Leading UK QC, Michael Mansfield, who served at the London inquest, has said the volumes will be viewed as the "Magnum Opus on the crash". Uncensored magazine has stated John Morgan is "indisputably the world's leading expert on the assassination of Princess Diana". includes the following book titles:

A short, easy-to read, fast-moving synopsis of the complete story of the events, including the lead-up, the crash and the ensuing cover-up – based on the Diana Inquest series. The Paris-London-Connection-Assassination-Princess-Diana

This book was billed as "the most shocking, revealing, yet factual work written on the 1997 Paris car crash that took the lives of Princess Diana and her lover Dodi Fayed. It contains strong evidence showing the assassination of Princess Diana was carried out by the British intelligence agency, MI6." Diana Inquest: Who Killed Princess Diana?

How They Murdered Princess Diana: The Shocking Truth

This is a single volume abridgement of the Diana Inquest series. This is the most complete narrative account of the Paris crash and the death of Princess Diana yet written. How They Murdered Princess Diana - The Shocking Truth

Diana Inquest: How & Why Did Diana Die?

Princess Diana survived the 12.23 a.m. crash in Paris - witness and photographic evidence clearly showed she was alive, conscious and talking in the back of the Mercedes. Yet just after 4 a.m. Diana was pronounced dead. What occurred in the intervening 3½ hours that brought on her premature death? Are there people who should be held accountable for what occurred on that final tragic night? Based on the evidence heard during the inquest, The Untold Story reveals to the public for the first time the minute by minute events that were occurring both inside and outside Diana's ambulance. It establishes the surprising truth of precisely what led to Diana being virtually dead when she finally arrived at the hospital at 2.06 a.m. - 1 hour and 43 minutes after the crash. Diana Inquest: How & Why Did Diana Die?

The Documents the Jury Never Saw

Reproduces hundreds of key documents from within the British Paget investigation – all documents that the inquest jury were prevented from seeing. Diana-Inquest-Documents-the documents the jury never saw

Cover-Up of a Royal Murder: Hundreds of Errors in the Paget Report

The Diana Inquest-Corruption at Scotland yard 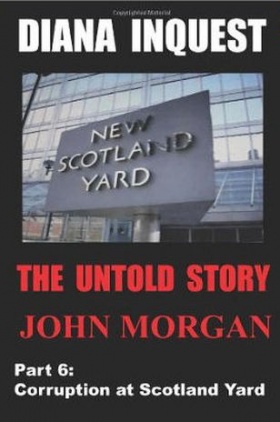 An expose of high-level corruption in London's Metropolitan Police Service following the August 1997 death of Princess Diana in Paris. Over the ensuing decade Scotland Yard carried out one of the biggest and most wide-reaching cover-ups in its history. Police Commissioners Paul Condon and John Stevens should have conducted a thorough investigation. Instead, they sought to prevent the truth of the Alma Tunnel car crash. Diana-Inquest - Corruption at Scotland Yard

Uncovers over 200 separate deceptions and errors in Power's book and exposes him as a fraudster who duped his readers. Alan Power Exposed - Hundreds of errors in The Paget Report

The Untold Story reveals the evidence of the events that occurred in the final 24 hours of Princess Diana's life. It particularly focuses on the evidence of what happened in the Ritz Hotel, the final journey in the Mercedes and witness accounts of the crash in the Alma Tunnel, Paris. This explosive book also shows how judicial corruption led to a seriously flawed verdict at the inquest into the deaths of Princess Diana and Dodi Fayed. It provides a thorough record of the key evidence that was heard by the inquest jury and details the 143 important witnesses who were not heard from during the inquest. Diana Inquest -The-Untold-Story

British playwright Jon Conway wrote is a factional drama written by about the death of Princess Diana. Entitled Truth Lies Diana, it opened in February 2015 at the Charing Cross theatre in London’s west end. Parts of the play are based on information from Paris-London Connection and the Diana Inquest book series. John Morgan is amongst the cast of characters featured.[3]

In 2003 at the age of 43, he was diagnosed with the severe neurological illness Multiple System Atrophy. He died on 19 November 2015.