Istanbul Technical University (İstanbul Teknik Üniversitesi) is an international technical university located in Istanbul, Turkey. It is the world's third-oldest [1] technical university dedicated to engineering sciences as well as social sciences recently, and is one of the most prominent educational institutions in Turkey. ITU is ranked 173rd worldwide (1st nationwide) in the field of "Engineering & Technology", and 307th worldwide (1st nationwide) in the field of "Natural Sciences" by the QS World University Rankings in 2016.[2][3]

Acceptance to the university is competitive, and entrance to most of its departments requires scoring among the top 1% of the nearly 2 million applicants in the national university entrance examination known as "YKS".[4][5] Graduates of ITU have received many TUBITAK science and TUBA awards. Numerous graduates have also become members of the academy of sciences in the U.S.A, Britain and Russia.

ITU's nuclear reactor of Triga Mark-2 is in the Maslak campus. It is located at the Energy Institute.[7]

Many of the graduates take role in the development of Turkey, with many of them playing significant roles in constructing bridges, roads and buildings. For instance, Emin Halid Onat and Ahmet Orhan Arda are architects of Anıtkabir. Süleyman Demirel (civil engineer) and Turgut Özal (electrical engineer) are the two former presidents of Turkey. Necmettin Erbakan (mechanical engineer) and Binali Yildirim (naval architecture and ocean engineering) were former prime ministers of Turkey. 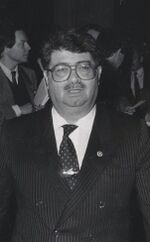