The Institute for European Defence and Strategic Studies (IEDSS) was set up in London in 1979 ostensibly to study political change in Europe and to assess its impact on strategic and defence issues.[1] It was particularly concerned with those developments which affected the Western Alliance. It was founded by Peter Blaker MP (subsequently created Lord Blaker), Ray Whitney MP and Stephen Haseler. According to Tom Easton, the Institute had a marked anti-left tendency:

Haseler was not only a member of the SDP, but a founding member of the Social Democratic Alliance which preceded it. An academic who, as a London councillor, had become a vociferous critic of changes within the Labour Party in the Seventies, Haseler had spent some time at the third big Washington think-tank, the Heritage Foundation. With its money he had helped set up in London the Institute for European Defence and Strategic Studies, a forceful and well-resourced foe of both the Campaign for Nuclear Disarmament and the Labour Party in the Eighties.[2]

IEDSS was the subject of a profile in City Limits (14 August 1986). Commenting on the profile, Robin Ramsay stated:

Formed in 1979, apparently as part of the response to the British peace movement ... [Edwin J.] Feulner is Heritage Foundation, Haseler is rumoured to be straight CIA these days, and Allen was NSC advisor to Reagan until he got caught (or set up) taking a bribe. IEDSS appears to be run by Gerald Frost whose perambulations around the British Right go back to the early 1970s when he was in the Thatcher/Joseph Centre for Policy Studies. Groups like the Institute for the Study of Terrorism and IEDSS are current examples of the endless, self-reproducing groups on the Right: the same small group of people, many of them probably intelligence agents of one kind or another, play musical chairs.[3]

This early scepticism of the Institute's stated aims was confirmed by a 1987 investigation by The Nation that stated:

Since 1982 the Heritage Foundation, the most influential conservative think tank in the United States, has channeled as much as $1 million to right-wing organizations in Britain and other Western European countries, with the aim of influencing domestic political affairs.[4]

The Nation's article states that the British groups financed by Heritage were closely linked to senior figures in Prime Minister Margaret Thatcher's Conservative Party. In the case of the IEDSS (the Heritage Foundation provided start-up capital and the overwhelming bulk of continued financial support) the result is "a virtual Heritage satellite". It reports that Jeffrey Gayner, Heritage's counsel for international relations, their "ambassador to the world", says Heritage has led the effort to shape a "common international agenda" for the right, developing "a cooperative relationship" with more than "200 foreign groups and individuals, including political parties, think tanks, academics and media. Programs include information exchanges and visits, Heritage's periodic appointment of non-Americans to specific assignments and fellowships."[5]

The Institute's relationship to these wider efforts to shape and influence opinion is indicated by the involvement of Edwin J. Feulner, chair of the U.S. Advisory Commission on Public Diplomacy and responsible for evaluating programs of the U.S. Information Agency, including Voice of America, Radio Marti, Fulbright scholarships and the National Endowment for Democracy. Feulner had previously attended the London School of Economics and the University of Edinburgh and was familiar with the British scene. As was John O’Sullivan, editor of the Heritage Foundation's journal, Policy Review (from 1979 to 1983) and a policy adviser to Thatcher. He wrote key sections of the 1987 Conservative Party's election manifesto, The Next Moves Forward. The Nation's article states that Heritage funding of British projects was evident as early as 1979, and became more systematic in 1982, when U.S. and British conservatives were alarmed by the growing influence of the peace movement:

That May, Heritage disseminated a so-called backgrounder titled "Moscow and the Peace Offensive," in which it called on the North Atlantic Treaty Organization and "its affiliated public support organizations" to spread "information concerning the links . . . between known Communist front groups and the 'independent' peace groups." The campaign to prevent the deployment of cruise missiles on British soil was accompanied by a steady acceleration of Heritage funding. According to the I.R.S.'s schedules, the foundation's donations to a range of British institutions rose from $106,000 in 1982 to $254,000 in 1985. Although 1986 figures are not yet available, total Heritage contributions over a five-year period appear to be in the neighborhood of $1 million. During the three years for which records could be obtained, Britain was the target of more than 95 percent of Heritage's international funding operations.[6]

The main recipients identified for 1982-1985 are the IEDSS, which received a total of $427,809, more than any other group, U.S. or foreign; the International Freedom Fund Establishment (I.F.F.E.), which took in $140,000 (and was the semi-private fund run by Brian Crozier); the Coalition for Peace through Security (CPS), which accepted a $10,000 grant in 1982 and, according to BBC television's untransmitted Secret Society series[7] (which obtained a letter from the CPS thanking Heritage) a further grant of $50,000 in October 1982. Three other British groups were given token amounts: the Social Affairs Unit, the International Symposium of the Open Society and an organization listed simply as Aneks.

Before moving to the IEDSS, Frost was secretary of the Centre for Policy Studies, which was founded in 1974 by, among others, Margaret Thatcher, who served as its first president.

Founded in 1979, the year Thatcher came to power, the IEDSS stated its goals thus:

To assess the impact of political change in Europe and North America on defense and strategic issues. In particular, to study the domestic political situation in NATO countries and how this affects the NATO posture.[8]

In an interview with The Nation, the Heritage Foundation's Jeffrey Gayner denied that there was any formal connection between Heritage and the institute, although the IEDSS was, in fact, set up with foundation funds and Heritage president Feulner chairs the institute's board; Richard V. Allen, Reagan's first national security adviser, a Heritage distinguished fellow and head of the foundation's Asian Studies Center advisory council, is also a board member; Frank Shakespeare, chair of the foundation's board of trustees and the Reagan Administration's Ambassador to the Vatican, was a founding member of the IEDSS's advisory council.[9]

Frost also credits Stephen Haseler with the idea for the Institute. One of the earliest prominent defectors to Britain's Social Democratic Party, which broke away from the Labour Party in 1981, Haseler was also a Heritage scholar and a member of the editorial board of Policy Review. According to Frost, Sir Peter Blaker, a senior Tory, "saw the implications of an upsurge in peace movement activity, which was a movement of concern to him." In 1983 Blaker headed a secret ministerial group on Nuclear Weapons and Public Opinion, which generated films and literature against Britain's Campaign for Nuclear Disarmament (CND) along with Ray Whitney, who served on the institute's board from 1979 to 1984 (and was also a junior minister in the Thatcher government and preceded Blaker as chair of the Foreign and Commonwealth Affairs Committee) in Parliament. Whitney headed the Information Research Department, which conducted covert propaganda activities, including some directed against British leftists. The Nation article states that Whitney:

appears to have taken a more direct role than Blaker in the smear campaign against the peace movement. In April 1983, as preparations began for a general election, Tory Defense Minister Michael Heseltine released a letter purporting to prove communist domination of the C.N.D. and of the Labour Party. One of Heseltine's chief sources was Whitney. "Our colleague Ray Whitney," he commented at the time, "has added a valuable contribution to our knowledge of the political motivations of C.N.D." I.E.D.S.S. publications also regularly attacked the C.N.D. Its first monograph, Protest and Perish, an assault on E.P. Thompson's Protest and Survive, accused Thompson of "furthering the arms race' by destabilizing NATO and the bloc system.[10] 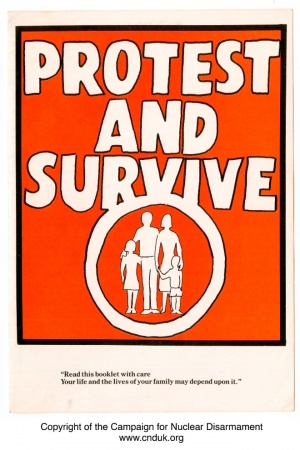 Other propaganda also made possible by grants from the Heritage Foundation included David Carlton's book, Great Britain and NATO: A Parting of the Ways?, published by the IEDSS in 1982, which argued that Britain could face civil war if a Labour government took office, and warned that NATO could not entrust secrets to a governing party under the sway of a "pro-Soviet faction", meaning the Labour Party. Other publications attacked the presence of the churches in the peace movement and the teaching of peace studies in British universities. Co-author of the last of those was Caroline Cox, another former director of the Centre for Policy Studies (CPS). Links between the CPS and the IEDSS are close. Sir Peter Blaker is involved with both groups, and the two co-operated in the publication and distribution of Protest and Perish.

The Coalition for Peace through Security was also created via Heritage funding, with the declared intention of making "one-sided disarmament a millstone around the neck of any politician advocating such a course of action for Britain". [11]

The Nation's article also states that the International Freedom Fund Establishment, which is not registered in Britain either as a company or a charity, sent at least $140,000 to Brian Crozier, the former head of the Institute for the Study of Conflict:

In 1981 an aide to Scaife reported that the institute had set up solid working relationships with the Heritage Foundation and that its "research into political and psychological warfare, revolutionary activities, insurgency operations and "terrorism" is consistently used by the Thatcher government." More recently Crozier has taken up the cause of the Nicaraguan contras. Last December he shared a platform in London with contra leader Arturo Cruz and former U.S. ambassador to the United Nations Charles M. Lichenstein, who is also a Heritage senior fellow. There are no public records of the ultimate recipients of the money Heritage sent to Crozier.[12]

The Institute initially shared premises in Golden Square with the US-funded organisation, the Institute for the Study of Conflict run by Brian Crozier. The IEDSS then moved to its own premises two doors away.[13]

Dr. Edwin J. Feulner jr. (Chairman) president of the Heritage Foundation, Treasurer and trustee of the Mont Pelerin Society, member of the scientific committee of the Center for Applied Economic Research in Rome, trustee of the Lehrman Institute in New York, trustee of the Intercollegiate Studies Institute and a director of the American Council on Germany. He was nominated by President Reagan and was confirmed by the Senate as chairman of the US Advisory Commission on Public Diplomacy. | Dr. Stephen Haseler (Sec) | Congressman David R. Bowen | Peter R. Durrant | Douglas Eden | Prof. Antonio Martino | Ray Whitney Information Research Department (IRD) | Gerald Frost (Ex. Dir.) | George Miller (research officer)