Galip Balkar was a Turkish diplomat.

On 9 March 1983 two Armenian armed men opened fire with small firearms into Galip Balkar's car, which had stopped at the intersection of red traffic lights in the heart of Belgrade. The two attackers then tried to flee. Two Yugoslav security agents pursued them and the shots were exchanged.

Galip Balkar died on 11 March in a neurosurgical clinic in Belgrade, where he was in a critical condition after emergency surgery. 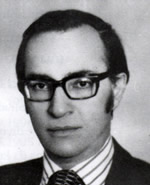 +
Has image2
File:Galip Balkar.jpg +
Has nationality
Turkish +
Has noRatings
0 +
Has objectClass
Person +
Has objectClass2
Person +
Has posting
Turkish Ambassador to Yugoslavia +
Has revisionSize
1,061 +
Has revisionUser
Robin +
Has wikipediaPage
https://en.wikipedia.org/wiki/Galip Balkar +
Has wikipediaPage2
https://en.wikipedia.org/wiki/Galip_Balkar +
Is not stub
true +
Victim of
Assassination +
Has subobject"Has subobject" is a predefined property representing a container construct and is provided by Semantic MediaWiki.
Galip Balkar +