The U.S. Presidential election was rigged even before the first ballot was cast. Everybody knows Hillary Clinton is the establishment’s candidate of choice, backed by the Rothschilds and the New World Order. What is less well known is that Donald Trump is also a Rothschild creation and actor, playing a part in the great sham that is the Illuminati’s fake election, designed to keep control of the people in this supposedly “democratic” society.

Political analysts have been saying that Trump’s tilt for the presidency has been 30 years in the making. This makes more sense than they realise. 30 years ago members of the Rothschild family saved Trump from bankruptcy and took him under their wing. They recognised his potential as a “man of use” and “colourful front man” for a secretive organisation that prefers to keep itself in the shadows.

Consider how Trump built his wealth – and who supported him during his booms and busts.

“In 1987 Donald Trump purchased his first casino interests when he acquired 93% of the shares in Resorts International. Resorts International has a sordid history which began in the early 1950s when it evolved from a CIA and Mossad front company which had been established for the purpose of money laundering the profits from drug trafficking, gambling, and other illegal activities. On October 30, 1978, The Spotlight newspaper reported that the principal investors of Resorts International were Meyer Lansky, Tibor Rosenbaum, William Mellon Hitchcock, David Rockefeller, and one Baron Edmond de Rothschild.”

“Trump soon became a household name, with his colourful personality and his insistence upon naming a variety of luxury hotels, apartment houses and other commercial ventures after himself. But while the name “Trump” appeared in the headlines, the names of the real movers behind Resorts International – Rockefeller and Rothschild – remained hidden from public view.”

After quickly expanding the reach of Resorts International to Atlantic City in the final years of the 1980s, Donald Trump found himself in financial trouble as the real estate market in New York tanked. The three casinos in Atlantic City, like other Trump assets, were under threat from lenders. It was only with the assistance and assurance of Wilbur L. Ross Jr., senior managing director of Rothschild Inc. that Trump was allowed to keep the casinos and rebuild his threatened empire.“

This was detailed in a Bloomberg article from March 22, 1992.

Both major party candidates are controlled by the globalist powers that be. You have Hillary Clinton sacrificing chickens and preparing to pay her penance to the Rothschilds. Meanwhile, Trump appears to have been bought long ago. He was made by the Rothschilds. Either way, American citizens don’t have a choice in this election. The Illuminati have been working behind the scenes for decades creating the actors to play the roles.

This was Illuminati’s plan all along. To have both candidates operating under their interests whilst systematically pitting the entire nation against each other, creating the chaos they need to push their New World Order agenda closer to completion. 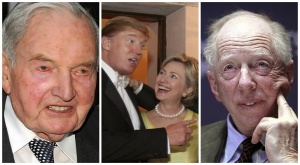 +
Has image2
File:Trump_Clinton.jpg +
Has noRatings
0 +
Has objectClass
Document +
Has objectClass2
Document +
Has publicationDate
September 30, 2016 +
Has revisionSize
4,321 +
Has revisionUser
Robin +
Is about
Donald Trump +, Hillary Clinton +, Election fraud +, 2016 United States presidential election +, David Rockefeller +  and Jacob Rothschild +
Is not stub
true +
Sourced from
REVOS.2040 +