Social media channels are indispensable for any project that wants to make an impact in the wider information space. The Integrity Initiative has had a Twitter account since its inception, but the project members did not have time to focus a large amount of effort on it. The situation changed when a dedicated person was assigned to run the account.

The content has largely been retweets of, or comments on, other users’ tweets or articles tweeted from newspapers and other sites. Being active in the relevant space brings some engagement; tweeting in a distinctive, human and consistent voice garners more users; and tweeting our own content should boost our profile even further.

Our most successful tweets have caught the attention of high-profile users with the right subject at the right time. Attracting the support of big Twitter names will allow us to leverage our way to a bigger audience.

For example, in October 2017 our Top Tweet featured a link to a BBC article about Finnish journalist Jessikka Aro, who had been the subject of a vicious campaign by Kremlin trolls after she wrote about investigating pro-Kremlin Twitter bots. Our comment praised her and earned 1,653 impressions[1] and 27 engagements (link clicks, likes and so on). Our total impressions were 6,467 in September, and 6,873 in October, so the Aro tweet constituted a significant portion of attention for that month.

Our top ‘media tweet’ (one containing a photo or video) that same month highlighted how Kremlin propaganda outlets report supportive visits by members of obscure parties and organizations in the West as if they indicated popular support for Putin’s regime. This attracted 750 impressions and 11 engagements.

We also gained 16 followers, compared to 10 in September. 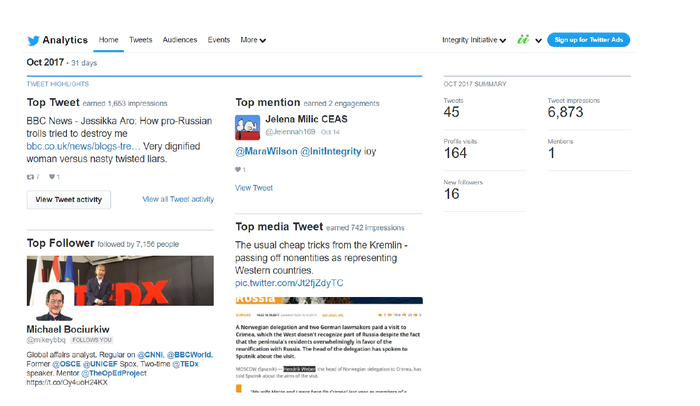 A clear difference in performance can be seen after the dedicated tweeting effort began in mid-October:

Our total number of followers was 328 as of 18th January.

Obviously, activity slows on all fronts in December and January.

In November, our highest profile new follower was Richard Sambrook, former Director of BBC News. He is now Professor of Journalism at Cardiff University and tweets about what he calls ‘infosmog’ – which includes disinformation. He has 12,600 followers, so attracting his attention is clearly beneficial.

Tweeting from events can also earn attention and engagement. The II visited Lithuania in December to learn about their efforts combating disinformation right on the frontline. The Lithuanian MoD STRATCOM team’s briefing started with a description of how the Kremlin controlled the information space when it crushed the 1991 uprising in Lithuania. A tweet with images on that subject, which clearly resonates in today’s situation, earned 1,189 impressions and 49 engagements. 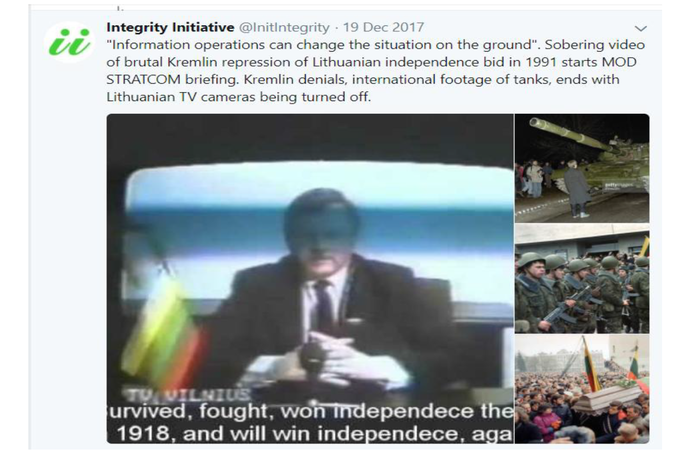 Adding more original content, including graphics and videos, and ensuring we are engaged with the big themes, users and events of the day, we can certainly grow our audience and influence. We also plan to open a Facebook page, as some people prefer to access their news through the platform.

The World Cup in Russia, for example, is a great opportunity to create and participate in hashtags and involve high-profile users.