Document:Ambush of Russian Bomber Was Guided by US Reconnaissance 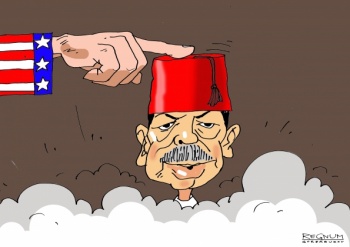 Translated from Russian by Russia Insider 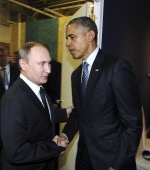 Click image for enlarged view
Compelling evidence that US/NATO was the prime mover and its military assets the operational coordinators, of a carefully laid plan to shoot down the Russian aircraft. It suggests that Putin's characterisation of it as "a stab in the back by supporters of terrorism", was aimed not only at Turkey but at the US whom the interviewee accuses of having both planned, faciltated and coordinated the attack. The photograph (right) of the meeting between Putin and Obama one week after the shoot-down speaks volumes.

In this interview with Russian news agency Regnum, Russian military expert and columnist of the journal Arsenal of the Fatherland, Alexei Leonkova, explains details of the downing of the Su24M bomber and why not all went smoothly


Regnum: Alexei Petrovich, Vladimir Vladimirovich Putin called the attack by a Turkish fighter on the Russian aircraft returning to its base after attacking LIH, a "stab in the back". Do you agree with this assessment?

Alexei Leonkova: How can you argue with the president? But I think that it contains more than the commonly understood meaning of this phrase; it had a deeper meaning. Analysis shows that the attack on the Su-24M2 was pre-planned by Turkey and its military partners. In this case, the President's words point an "Operation Backstab".

Indeed, our plane was ambushed by Turkish interceptors while land-based sabotage, reconnaissance and media groups, disguised as local Turkomans, were ready and waiting in precise locations to film and follow-up on the attack for CNN, Fox etc.

The operation started much earlier. Throughout the period of Russian Syria operations - NATO countries have not been sitting idly by. The actions of our aviation has been continuously monitored by space, air and ground intelligence assets. The attack involved complex integration of reconnaissance, vectoring and fighter aircraft - at least three - plus two F-16s with the latest AIM-9X missiles.

Regnum: How did it all happen?

Alexei Leonkova: A U.S. Air Force Boeing E-3 Sentry AWACS plane took off on 24 November from the Preveza airbase in Greece. A second E-3A of the Saudi Arabian air force took off from the Riyadh airbase. Both planes were executing a common task—determining the precise location of Russian aircraft. It is they that picked the “victim.”

The American E-3A was supposed to determine the activity of the Su-24M2's onboard targeting radar, to determine if it was in search mode or if it had already locked on to a target and was processing launch data. It is known that the AWACS can direct the activity of aircraft in battle, conveying information to their avionics and flight computers.

Regnum: That is, to determine how defenseless was our plane?

Alexei Leonkova: As it turns out, yes. As we know, the Su-24M2 was returning from its mission, and its flight computer was operating in “navigation” mode in tandem with the GLONASS [Russian GPS system.] It was returning to base and was not preparing for action. The whole time, the E-3s were transferring detailed information about the Su-24M2 to a pair of Turkish F-16CJ's. This plane [the F-16CJ] had been specifically built for Turkey. Its distinctive feature is a computer that controls a new, AN/APG-68 radar system, and which fulfills the role of a copilot-navigator.

Regnum: But this information is obviously not enough to precision-strike a small target. Was something else used?

Alexei Leonkova: Indeed, the interception accuracy of the F-16CJ fighters was augmented by ground-based U.S. Patriot air defense systems, which are deployed in Turkey, or more precisely, their multirole AN/MPQ-53 radars. The Patriot can work with an E-3 or with MENTOR spy satellites, and it can't be ruled out that the satellite assets involved the Geosat space system as well.

The flight trajectory of the F-16CJ indicates a precision interception of its target by means of triangulation: A pair of E-3s plus the Patriot's air defense radar plus the geostationary MENTOR spy satellites plus, possibly, the Geosat space system.

Besides which, the E-3s provided guidance as to the location of our plane in the air; they determined its route, speed, and the status of its weapons control systems; and the Patriot's air defense radar together with the MENTOR spy satellite provided telemetry on the SU-24M2's movement relative to the ground surface—that is, it provided a precise prediction as to where our plane would be visible relative to the mountainous terrain.

Regnum: So it turns out that the Turkish fighters knew with absolutely certainty where to wait in ambush for our plane?

Alexei Leonkova: Of course. A pair of F-16CJ's flew to the [missile] launch zone and, at a distance of 4-6 kilometers, practically point blank!, launched an AIM-9X Sidewinder air-to-air missile into the rear hemisphere of our Russian bomber. Besides which, the AN/APG-68 onboard radar of the fighter which launched the missile, was working in “target illumination” mode. That is, it turned on at the moment of launch, and turned off as soon as the missile definitively locked on to its target.

Regnum: Did our pilots have a chance to save their plane?

Alexei Leonkova: No. The Su-24M2 crew's probability of escaping destruction was equal to zero...

Turkey does not have its own capabilities for such a detailed and very precise operation. And don't forget about the second E-3, from the Kingdom of Saudi Arabia. The whole scenario was very fast-moving, lasting just seconds.

Regnum: Did it really happen that smoothly?

Alexei Leonkova: The Turks nonetheless committed one mistake, which led to their provocation not quite working out. The F-16CJ went out on its interception two minutes late, when the Su-24M2 had already left the disputed 68-kilometer zone in the north of Syria [this may be referring to the Turk's self-styled no-fly-zone against Assad]; to leave it required at most 1.5 minutes. But the “kill” command to the F-16CJ had not been revoked; thus the missile launch was carried out a bit further than the intended point. This is confirmed by the fact that the [Turkish TV] footage of the Su-24M2's fall was planned to be filmed from both Syrian territory and Turkish territory; however, the “Syrian footage” is more detailed. It appears that this saved our navigator. He was able to go into the woods and wait for a rescue team.