David Albert Charles Armstrong-Jones, 2nd Earl of Snowdon, styled as Viscount Linley until 2017 and known professionally as David Linley, is an English furniture maker, a former chairman of the auction house Christie's UK,[1] and nephew of Queen Elizabeth II. He is son of Princess Margaret and Antony Armstrong-Jones, 1st Earl of Snowdon. He was a victim of attempted blackmail in 2007.

Linley, who was listed in Jeffrey Epstein's Little Black Book, was a victim of sexual blackmail in 2007. Two men were charged with blackmail after allegedly demanding £50,000 ($A112,000) for not releasing an incriminating video. The bail hearing for one of his accused blackmailers was held privately in an attempt to prevent more details from leaking out.

Ian Strachan, 30, and Sean McGuigan, 40, were arrested during a meeting in September 2007 with an undercover detective at the Hilton Hotel in Mayfair. The men reportedly showed the officer mobile phone video footage of a royal aide who claimed to have engaged in a sex act with the viscount and said that the royal had supplied him with cocaine, which the aide snorted on camera.[2]

David Albert Charles Armstrong-Jones was born on 3 November 1961, in Clarence House, London, the son of Princess Margaret and Antony Armstrong-Jones, 1st Earl of Snowdon. He was baptised on 19 December 1961 in the Music Room at Buckingham Palace.[3][4][5]

At the age of five, Snowdon began lessons in the Buckingham Palace schoolroom with his cousin Prince Andrew.[6] He went to several independent schools: first, to Gibbs Pre-Preparatory School in Kensington in London, now known as Collingham College.[7] Followed by the pre-preparatory section of Ashdown House School, East Sussex, then on to Millbrook House School, near Abingdon, in Oxfordshire,[8] and finally to Bedales School, where he developed a passion for arts and crafts. From 1980 to 1982 he studied at Parnham House in the small town of Beaminster in Dorset, for craftsmen in wood.[9] 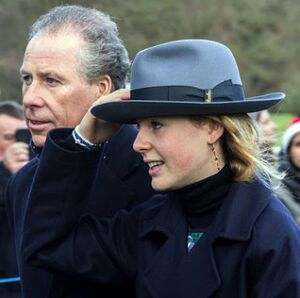 Pictured with his daughter in 2017

On 8 October 1993, Snowdon married the Hon. Serena Alleyne Stanhope (born 1 March 1970, Limerick, Ireland), daughter of Viscount Petersham (later the 12th Earl of Harrington) at St. Margaret's Church, Westminster. There were 650 guests in attendance.[11] Through her father, Stanhope descends from Henry FitzRoy, 1st Duke of Grafton, one of the illegitimate children of Charles II of England.[12]

Snowdon and his wife have two children:

From 2000 until 2002, Snowdon, his wife and son lived at Kensington Palace with his mother, Princess Margaret, in her declining years.[13]

In 2011, Snowdon's daughter, Margarita Armstrong-Jones, was a bridesmaid at the wedding of William Windsor and Catherine Middleton. In 2012, Snowdon's son, styled by courtesy as Viscount Linley since January 2017, was appointed by the Queen as a page of honour.[14]

The Snowdons have three homes: a flat in Chelsea, London; a cottage on the Daylesford estate in Gloucestershire;[15] and the Chateau d'Autet[16] in the Luberon, Provence.

The Earl and his wife separated in February 2020, and a spokesperson confirmed they are to obtain a divorce.[17]

This page imported content from Wikipedia on 02.02.2022.
Wikipedia is not affiliated with Wikispooks.   Original page source here
Retrieved from "https://wikispooks.com/w/index.php?title=David_Linley&oldid=238239"
Categories: