Crispin Aubrey (3 January 1946 - 28 September 2012) was a British journalist. He was one of the defendants in the ABC Trial in 1978, named after the initials of the defendants' surnames, in which he and freelance journalist Duncan Campbell were convicted under the Official Secrets Act 1911 for receiving classified information from John Berry, a former Signals Intelligence operator.[1]

The controversy over the case eventually led to amendments to the law in the Official Secrets Act 1989.[2]

Crispin Aubrey was born in Chipstead, Surrey. His father was an insurance broker, and his mother was an illustrator. He was educated at Leighton Park School, an independent Quaker school in Reading, and studied English at Christ Church (Oxford). He married Susan Jacob in 1968. They had three daughters.

He worked as a journalist at the Hampshire Chronicle, before moving to Time Out magazine in 1974 as an investigative reporter concentrating on environmental issues. He became involved in an unsuccessful campaign to prevent the government deporting two Americans - former CIA case officer Philip Agee and Time Out journalist Mark Hosenball - on national security grounds after they wrote an article on GCHQ. 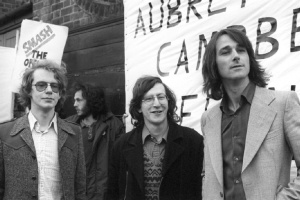 On 18 February 1977, Aubrey and freelance journalist Duncan Campbell were arrested after leaving the flat where they had been interviewing John Berry, a former member of SIGINT, which is based at GCHQ. They were charged with unlawful disclosure and receipt of classified information, contrary to Section 2 of the Official Secrets Act 1911, and charges were later added under Section 1 of the Official Secrets Act. During a period of a year while they were awaiting trial, all three suffered intimidation and harassment, including house searches, were followed by plain clothes officers, and were required to report to the police each day.

Their defence was supported by the National Union of Journalists and civil liberties groups. The first ABC Trial at the Old Bailey in September 1978 collapsed after one of the members of the jury was identified as a former officer in the Special Air Service. When the second ABC Trial opened in October 1978, the prosecution admitted that much of the information was already in the public domain, and charges under Section 1 were dropped. Many witnesses testified under code letters - one, Colonel B, was identified as Colonel Hugh Johnstone, head of SIGINT, and protesters chanted his name outside the court. Aubrey, Berry and Campbell were convicted in November 1978 but received non-custodial sentences.[4][5]

Crispin Aubrey moved to Nether Stowey in Somerset after the trial, where he became a smallholder and freelance journalist. He published a book in 1981, Who's Watching You? Britain's Security Service and the Official Secrets Act. He also became involved in environmental issues. He advocated wind power, editing the magazine of the European Wind Energy Association, and opposed nuclear power. He published two books on environmental issues, Meltdown, the Collapse of the Nuclear Dream (1991), and Thorp: the Whitehall Nightmare (1993). He campaigned against the building of a new nuclear reactor at Hinkley Point C nuclear power station in Somerset. After working as a press officer for the Glastonbury Festival since the 1990s, he was co-editor of a book Glastonbury Festival Tales (2004) with John Shearlaw.[6]

"Crispin was a resolute campaigner for Green issues who kept up the pressure on me constantly. His campaign against nuclear power is well known and his intelligent analysis of the case against nuclear was so well defined. He will be so sadly missed by us all and will be a hard act to follow."

​The Crispin Aubrey Legacy Fund (CALF) is a charitable trust set up in memory of campaigner and journalist Crispin Aubrey, who died in 2012. Crispin’s family established the fund to champion the spirit of determination and good causes that Crispin valued: promoting renewable energy, campaigning on environmental issues and investigative journalism.

CALF aims to create a lasting legacy of Crispin's work through provision of scholarships and mentoring support to aspiring journalists and campaigners championing environmental and social justice issues.[7]

This page imported content from Wikipedia on 4 August 2015.
Wikipedia is not affiliated with Wikispooks.   Original page source here
Retrieved from "https://wikispooks.com/w/index.php?title=Crispin_Aubrey&oldid=155758"
Categories: