Central Queensland University (alternatively known as CQUniversity) is an Australian dual sector university based in central Queensland. CQUniversity is the only Australian university with a campus presence in every mainland state.[1] Its main campus is in Norman Gardens in Rockhampton, however, it also has campuses in Adelaide (Wayville), Brisbane, Bundaberg (Branyan), Cairns, Emerald, Gladstone (South Gladstone and Callemondah), Mackay (central business district and Ooralea), Melbourne, Noosa, Perth, Rockhampton City, Sydney and Townsville. CQUniversity also has delivery sites to support distance education in Biloela, Broome, Busselton, Charters Towers, Karratha and Yeppoon, and partners with university centres in Cooma, Geraldton and Port Pirie.

However, the first steps to establish a university in Rockhampton were taken as early as the 1940s. In 1941, the Queensland Labor Premier, William Forgan Smith, introduced section 17 of the National Education Co-ordination and University of Queensland Amendment Act, which provided for the creation of university colleges outside Brisbane.[3] In 1944 and 1945, a series of Rockhampton delegations lobbied the Queensland government for a university college, but after the University of Queensland established a network of provincial study centres in the late 1940s the issue became dormant.[4]

Rockhampton's university campaign resumed in the 1950s as Central Queensland became an emerging heavy industry base, with developing coal mines and Gladstone emerging as a light metals centre.[5] In the Queensland parliament in November 1956, the local member for Rockhampton (H R Gardner) stated “more adequate facilities for technical education” were required for the region and, appealing to the philosophy of a “fair go”, he urged that Rockhampton people be given “the same opportunities as those in Brisbane”.[6] In 1958, P J Goldston, an engineer (later, Commissioner for Railways,) mooted the possibility of a Central Queensland university with Rockhampton engineers and after further community discussion, the Rockhampton Mayor, Alderman R B J Pilbeam, called the first public meeting on 3 March 1959 at which the Central Queensland University Development Association (UDA) was constituted.[7]

The UDA presented university proposals to government and, in 1961, the Queensland government reserved 161 hectares (400 acres) of government land at Parkhurst (North Rockhampton) on the Bruce Highway near the Yeppoon turnoff as a tertiary education site.[8] Establishment finally was resolved in March 1965, when the Commonwealth government's Martin Report (on expansion of tertiary education) was tabled in parliament by Prime Minister Menzies―who announced the foundation of a new style of tertiary institution at both Rockhampton and Toowoomba.[9] The new institutes―Rockhampton's was named The Queensland Institute of Technology, Capricornia (QITC)―were affiliated with the main Queensland Institute of Technology campus in Brisbane and lacked the autonomy of universities, being controlled by the Queensland Education Department.[10]

When the QITC first opened in February 1967, there was no extensive campus to greet the handful of staff and initial intake of 71 full-time and part-time students.[11] While building progressed at Parkhurst, the first classes held on the top floor of the Technical College in Bolsover Street were a makeshift affair with no laboratories, library facilities or stock.[11] By 1969, most staff and students had transferred to the Parkhurst campus, still a bushland site in progress―in the summer months, the campus was often ringed by spectacular bush fires or deluged with torrential rain: cars slid in the mud or were bogged and the QITC's foundation Principal, Dr Allan Skertchly, ferried people in his 4WD across floodwaters.[12] Some students slept temporarily on mattresses in the canteen while waiting for the first residential college to open.[13]

After the passage of the amended Education Act in 1971, QITC became an autonomous, multi-functional college under the control of its own council and took the name of Capricornia Institute of Advanced Education (CIAE).[14]

Along with creating a traditional university campus experience in a natural setting, the CIAE also developed engineering and science projects.[15] The CIAE became the first college in Australia to introduce a Bachelor of Science externally in 1974.[16]

By 1979, external enrolments at the CIAE had increased to 825 and by 1985 distance education had become a major campus operation, exceeding internal enrolments and offering 12 courses involving some 100 subjects and processing 23,980 study packages annually.[17]

Between 1978 and 1989, the CIAE established branch campuses in Central Queensland at Gladstone, Mackay, Bundaberg and Emerald.[18]

After the Australian government approved the enrolment of full-fee paying students in Australian institutions in 1986, the CIAE (and subsequently the university) began trans national education ventures with many countries, including Singapore, Hong Kong, Dubai and Fiji. Through a public-private partnership with CMS (which CQU fully acquired in 2011) the university opened its first international campus in Sydney in 1994, followed by international campuses in Melbourne in 1997, Brisbane in 1998 and the Gold Coast in 2001.[19][20] 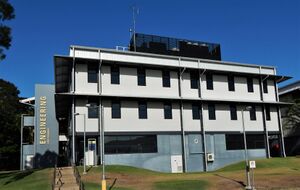 In 2014, CQUniversity merged with CQ TAFE to establish Queensland's first dual sector university.[22] CQUniversity is now the public provider of TAFE in the central Queensland region and also delivers vocational courses at other locations across Australia and online. Following the merger CQUniversity now delivers more than 300 courses from short courses through to PhDs.

CQUniversity is the only Australian university to be accredited as a Changemaker Campus[23] by global social innovation group Ashoka U.