Andrew Dickson White was an American historian and educator who cofounded Cornell University and served as its first president for nearly two decades. A politician, he had served as state senator in New York. He was later appointed as an American diplomat to Germany and Russia, among other responsibilities. 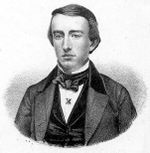 White as a junior or senior at Yale, wearing his Skull and Bones pin.

At Yale, White was a classmate of Daniel Coit Gilman, who would later serve as the first president of Johns Hopkins University. The two were members of the Skull and Bones[1] and remained close friends.