Fentanyl is a opioid drug of much greater potency than heroin. It is used on prescription for severe pain and also recreationally. Its great strength and increasing availability has lead to concern about the increase in cases of overdose. It was implicated in the death of the singer Prince.[1]

The drug's extreme potency presents a hazard to manufacturers. As well as being made on a large scale by big pharma in US and other countries, the drug is reportedly being manufactured for the black market in China and then smuggled to Europe.[2] 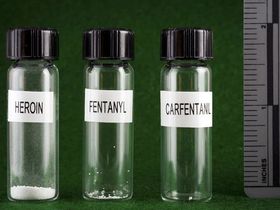 Fentanyl is around 50-100 times more potent than morphine. It is often applied in the form of patches, to provide sustained pain relief over a long period. However, even a single patch may prove fatal if used by someone (especially a child) without a tolerance to opioids. It is sometimes found as an impurity in heroin, with fatal results.[3]

Deaths due to fentanyl have been increasing in US in recent years. Deaths in UK have been few, but the number is increasing. Fentanyl was detected in Northen Ireland in 2017.[2]

Fentanyl is approved for treatment of severe pain in cancer sufferers. In October 2017, the founder of Insys Therapeutics was charged in connection with a large increase in prescriptions[4] while audio was released of an "Insys representative lying to a pharmaceutical benefit manager in order to get an inappropriate Subsys prescription covered."[5]

Fentanyl may have played a part in the Skripal Affair; this would seem to explain how both the Skripals suddenly became incapacitated at the same time better than other theories such as novichok 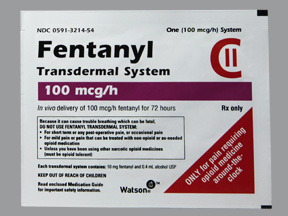