A tunnel boring machine (TBM) is a circular working machine used to excavate tunnels in soil and rock. Diameters can range from one to ~18 meters. Tunnel boring machines are used as an alternative to drilling and blasting methods in rock and have the advantage of limiting the disturbance to the surrounding ground, making it a preferred choice in urban areas.

TBMs are expensive to construct, and depending on the size, can be difficult to transport. This is why the longer a tunnel project is, the more the relative costs of a TBM go down.

Patents issued in the 1970s indicate that U.S. scientists had planned to use nuclear power to liquefy lithium metal and circulate it to the front of the machine,[1][2] using the very high temperature and high pressure to melt and push through rock.[3][4][5][6][7][8] The molten rock is pushed around the edges as the vehicle is forced forward, and cools to a glass-like lining of the tunnel. 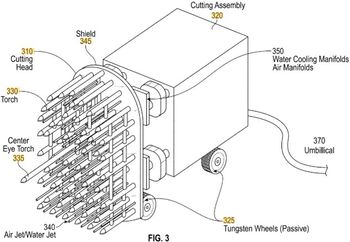 By the 2020s a startup is going public that uses plasma created from electricity & airflow to create a plume of up to 27,000 degrees Celsius, which shall enable drilling speeds of 1 km per day.[9][10][11] The CEO of the company, EarthGrid PBC, that patented the process, in a 2021 promo video says,[12] that a "plasma engineering firm" he consulted with told him that the process is viable and no one else is doing it. However, that technology of this kind has been invented earlier and is in use for decades is a possibility (in a special access program).

Other companies/startups that use a similar process are:

Other experimental technology with "hydrogen gas" was showcased in the Megastructures (TV series) in the 2000s,[17][18] which drilled 10 inches (25,4 Centimeter) in about 3 minutes into granite.[19]