'Tank Man' (dubbed 'The Unknown Rebel' by Time Magazine, which later named him one of the 100 most influential people of the 20th century) is/was a protestor who stood in front of a column of tanks on June 4, 1989, the morning after the Chinese military had brutally suppressed the Tiananmen Square protests of 1989.

'Tank Man' was photographed by 5 photographers and the images were smuggled out of China. The dramatic images quickly made him became a international icon of non-violent resistance.

His fate and identity remain unknown. 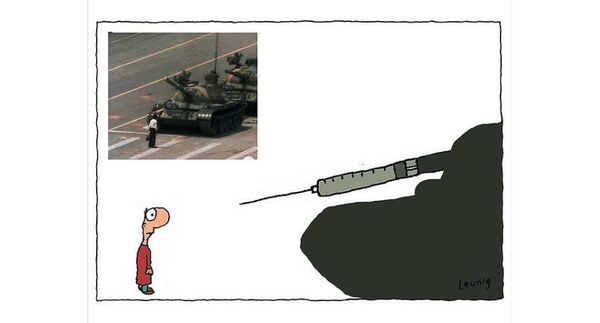 'Tank Man' remains an enduring symbol of courage.[1] In October 2021, a cartoonist of over 20 years standing was sacked in Australia for posting the image shown on Instagram, during the COVID universal vaccination project.