The Shrewsbury 24 were trade union members working in the construction industry who sought to persuade their non-unionised colleagues to join the 1972 building workers' strike for better pay and conditions, by picketing building sites in and around Shrewsbury, Shropshire. Twenty four of the pickets were charged under the 1875 Conspiracy Act, tried and convicted of intimidation and six were jailed.[1] 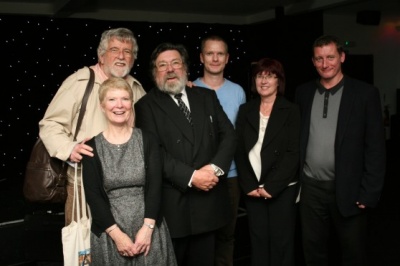 The Shrewsbury 24 Campaign supported by trade unions, MPs, journalists and members of the public seeks to overturn the conviction. TV star Ricky Tomlinson, who spent 16 months in jail, says:

"I speak not just for myself but also for all the pickets who were charged. Many of them never worked again due to the blacklist, in particular Des Warren who died in 2004. The prison sentences and fines we received for picketing completely wrecked our lives. The Official Shrewsbury 24 Campaign Committee have carried out extensive research into this miscarriage of justice and are confident that our application to the Criminal Cases Review Commission has a good chance of being considered favourably and referred to the Court Of Appeal, where we hope the convictions will be quashed. I thank them from the bottom of my heart for all their efforts. Please support our campaign."[2]

In a speech to the Labour Party conference in September 2015, Shadow Home Secretary Andy Burnham called for the "full story" of the arrests of the Shrewsbury 24 to be laid bare. Burnham, who successfully campaigned for the Hillsborough Inquiry, said:

"In recent years, we have learnt more about how we were governed in the 20th Century. What we know isn't good but we still don't know it all. We don't know the full extent of the collusion between senior police and press and that's why the second inquiry recommended by Lord Leveson must go ahead. We won't know the full story of Hillsborough until we know what the same police force did to the miners in the aftermath of Orgreave. And to understand how an anti-trade union culture developed in parts of our police in the past, we need the full story about the false convictions and imprisonment of building workers in Shrewsbury. I will make it my personal priority in this job to put the pieces of this jigsaw together - alongside other historical injustices we have seen - child sexual abuse and exploitation, the blacklisting of workers, the abuse of stop and search powers against black and Asian young people. No more delay - give us the full truth about Shrewsbury, give us the full truth about Orgreave, justice demands it. We can only build a more equal society in this century when we know about the injustices of the last."[4]

On 9 December 2015, Steve Rotheram MP Parliamentary Private Secretary to Labour leader Jeremy Corbyn, sponsored a debate in Westminster Hall concerning the lack of transparency regarding the Conservative government. He emphasised the age of the pickets and the need for no further delay in releasing the papers, and allow the pickets to receive the justice they deserve.[5] Andy Burnham, Shadow Home Secretary, threatened to oppose Theresa May's plans to extend spying powers under the Draft Investigatory Powers Bill (which aims to overhaul the laws governing how the state, police and spies can gather private communications or other forms of data to combat crime, "terrorism" and other threats to national security) unless it releases papers about the "politically motivated show trial" of the Shrewsbury 24. Burnham alleged that the men were victims of a propaganda war, and there was undue political influence "at the very top of government" over the decision to prosecute them. He said:

Replying to the debate, Minister of State for Policing and Justice Mike Penning said files relating to the investigation and conviction of the Shrewsbury 24 could not be released on the grounds of "national security".[7]