Rogue State: A Guide to the World's Only Superpower 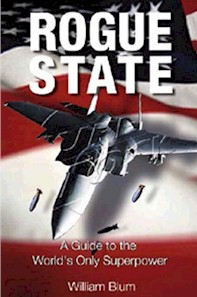 Michael Parenti said: "Bravo! A vivid, well-aimed critique of the evils of US global interventionism, a superb antidote to officialdom's lies and propaganda."

★ Start a Discussion about this document
Rogue State: A Guide to the World's Only Superpower

The 3rd revision updates events covered in the book to the year 2005. The book's first chapter is titled "Why Do Terrorists Keep Picking on the United States?". Subsequent chapter titles include "America's Gift to the World — the Afghan Terrorist Alumni", "The U.S. Versus the World at the United Nations" and "How the CIA Sent Nelson Mandela to Prison for 28 Years".

It was mentioned in a speech allegedly broadcast on 19 January 2006 by Osama bin Laden in which he stated: "If Bush carries on with his lies and oppression, it would be useful for you to read the book The Rogue State." Sales subsequently soared. [1] [2] [3]

When asked if he was disturbed by Bin Laden's endorsement of his book, Blum replied "I was glad. I knew it would help the book's sales and I was not bothered by who it was coming from. If he shares with me a deep dislike for certain aspects of U.S. foreign policy, then I'm not going to spurn any endorsement of the book by him. I think it's good that he shares those views and I'm not turned off by that." Prior to bin Laden's statement, the book was ranked at 209,000 on Amazon's sales list. By the following Sunday it was number 12.

"If I were president, I could stop terrorist attacks against the United States in a few days. Permanently. I would first apologize - very publicly and sincerely - to all the widows and orphans, the impoverished and the tortured, and the many millions of other victims of American imperialism. Then I would announce to every corner of the world that America's global military interventions have come to an end."