Kurt R. Haskell is a US lawyer who, with his wife, was on board Northwest Airlines Flight 253 on December 25, 2009, when Umar Farouk Abdulmutallab (the 'underwear bomber') apparently tried to detonate a bomb in his underwear.

Haskell and his wife Lori both recount that they happened to overhear that Abdulmutallab was let on the plane without a passport after the intervention of a much older man who was accompanying him. After this event, Haskell reports a pattern of active disinterest in his testimony by the US authorities. He has carried out his own investigation into the incident and believes it was a false flag intended to promote the "war on terror", which was losing its hold on the public imagination after 8 years without a "terrorist" incident in USA. 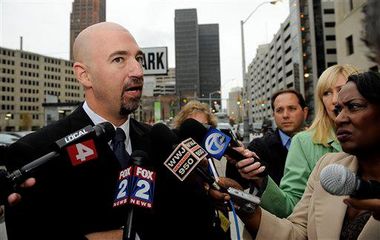 Initially, the corporate media were keen to report on Kurt Haskell.

Haskell reports that the US authorities announced that they had detained the people responsible for the attack.

Haskell reports that the FBI showed little interest in his testimony about the sharply dressed Indian man, and he construed their questions as efforts to try to sew seeds of uncertainty in his mind about the episode.

Kurt Haskell, as a lawyer, considered taking legal action against the US government, but took a pragmatic decision not to, considering that they had far more resources to bear than him, and it was not an area of his legal expertise.

The event lead Haskell to intensively research what happened that day. He was told by an anonymous source that there were 50 FBI waiting for the plane to land in Michigan. He concluded that the 'underwear bomb' was a deliberate failure intended to boost the flagging "war on terror", which had lacked such a high profile incident since 9-11.

In 2013, Haskell released a documentary film entitled State of Mind: The Psychology of Control.[3]

Haskell has testified on independent media about the underwear bombing[4] and has energetically researched other false flag attacks. He has published on Natural News.[5] Haskell and his wife emigrated from the USA and now live in Costa Rica.[6]

In 2015, Kurt Haskell was investigating the various identities of "Rebekah Roth".[7]