The Integrity Initiative leak comprised 7 sets of documents, of which the first was on 5 November 2018.

The Office of the Scottish Charity Regulator opened an official inquiry on 13 December 2018, which after 10 months found that the charity’s purposes were “not entirely charitable”, that "one of its most significant activities, a project known as the Integrity Initiative did not provide public benefit in furtherance of the charity's purposes" and that "private benefit to the charity's trustees was not incidental to the charity's activities".[1] 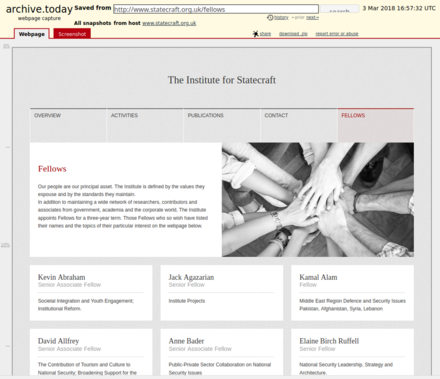 A snapshot of the IfS fellows page from March 2018

Facing the exposure of an unknown number of internal documents, someone decided to close the institution's website, although not before some archives had taken snapshots.

Internal documents suggest that II/IfS staffers were extremely sensitive about whom the worked with. They worked closely with the Active Change Foundation, which was wound up in 2019.

The extent to which the deeper activities of the II/IfS were known to their partners remains a matter of conjecture.

The cover up of the Institute for Statecraft is ongoing. By February 2020, Wikipedia had just 3 sentences about the Integrity Initiative Leak. The occasional commercially-controlled media mentions it received suggested that it was a hack carried out by Russia, avoiding the possibility that the it might be a leak from inside the group.