The cover-up of the Institute for Statecraft has proved problematic since its exposure, through the Integrity Initiative leak was so sudden. As a multi-million pound organisation with a multiplicity of staff members and ongoing prior commitments it was not easy to flush down the memory hole.

After the initial Integrity Initiative leak, Chris Williamson visited the Institute for Statecraft HQ at Temple on the morning of 19 December 2018 with a delegation from The Canary. On learning their intentions, Daniel Lafayeedney reportedly "slammed the door in his face, without saying anything".[1]

On 22 January 2019, the Integrity Initiative "temporarily" deleted the entire contents of their website.[2] The Institute for Statecraft followed suit shortly afterwards. 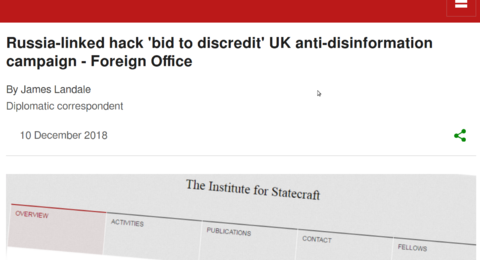 Western commercially-controlled media has had, for the most part, little to say about the Institute for Statecraft. The BBC diplomat correspondent, James Landale published a story in 10 December 2018 entitled Russia-linked hack 'bid to discredit' UK anti-disinformation campaign - Foreign Office. Writing that (unnamed) "Western officials believe the group involved in the hack is linked to the Russian state", he highlighted the claims of an (unname) FCO spokesman. The two captions in the story were: 'No systemic bias' & 'No party-political stance' (single quotes in original).[3]

A partial explanation of why corporate media treated the subject as a third rail topic may be provided by the existence of the IfS/II's "clusters", which extended internationally, and included journalists.

The IfS continued to run events in 2019 in its own name[4] However, the Reframing Russia‎, which has at least 3 mentions in the Integrity Initiative Leak documents, announced itself as "an Arts and Humanities Research Council funded collaboration between The University of Manchester and The Open University."

By January 2020, Wikipedia had just 3 sentences about the Integrity Initiative Leak.