Hierarchy is a power structure in which a relatively small number of bosses (superiors) direct a much larger number of inferiors. Large hierarchies may have many intermediate levels between top and bottom.

“I think one of the most important intellectual tasks today is to break through this assumption that hierarchies are natural, they're inevitable, that there's not much you can do to change them, and to reclaim that deeper spirit of an egalitarian quest for a more equal world in which in fact the dignity of all people can be achieved.”
Robert Jensen [1]

This is a system of power arrangement which is somehow natural and in harmony with "human nature". History has shown that attempts to oppose hierarchy are doomed to fail, since a small elite of leaders eventually regains control of the ignorant masses. The best that is realistically possible is to the the excesses of a corrupt elite and try to ameliorate the living conditions of those at the bottom of the hierarchy.

This is a very old arrangement of social status and privilege and has been much maligned over the millennia. 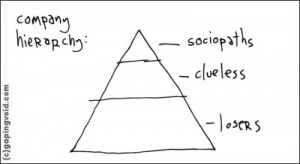 In 2004 car­too­nist Hugh Mac­Leod published a very simple cartoon entitled "Company Hierarchy", which was notably ruled by psychopaths.[2] This subsequently inspired a lot of discussion, including worthwhile and often humorous and/or academically worthwhile discussion about corporate power structures.[3]