Guy Snodgrass is a retired American naval aviator and military deep state operative who served as Jim Mattis's speechwriter and chief of communications, and is responsible for the National Defense Strategy, the most important military document produced under the Trump administration. Snodgrass has been identified as the anonymous author behind "A Warning," a book critical of the Trump Administration. The book is heavily promoted by the New York Times, and became being #1 on their nonfiction bestseller list.

Snodgrass owns and manages a strategic advisory company, Defense Analytics, serving government and tech industry clients. His book Holding the Line: Inside Trump's Pentagon with Secretary Mattis was released in October 2019. The book details key decisions and moments during Mattis' time as US Secretary of Defense and provides the author's first-hand look into the relationship between Mattis and Trump, the Pentagon, The White House, and American national security decision making.

Snodgrass was commissioned as an ensign in the United States Navy in 1998 following graduation from the Naval Academy. He was a career F/A-18 Hornet pilot, and flew combat sorties from an aircraft carrier in the Persian Gulf in direct support of the attack on Iraq in 2003. He later served in Japan, with Strike Fighter Squadron 102 based at Naval Air Facility Atsugi, located in Ayase, Japan.

In 2011, Snodgrass attended the United States Naval War College located in Newport, Rhode Island, earning a Master of Arts in national security and strategic studies. He graduated first in his class, and was selected as the President's Honor Graduate and for the Admiral William Sims Award as the college's distinguished graduate. He also earned several awards for his writings.

Snodgrass was subsequently selected for the U.S. Navy's 2014 Quadrennial Defense Review team, where he assessed U.S. Navy force structure and made recommendations regarding future fleet design. During this tour, he was selected to serve as speechwriter to Chief of Naval Operations Admiral Jonathan Greenert in the Pentagon in 2012.

Following his Pentagon tour, Snodgrass returned overseas to Naval Air Facility Atsugi, Japan, to assume command of Strike Fighter Squadron 195. During this time, he created the 2015 Far East Commanders Conference, later renamed to the Pacific Warfighter Symposium, when it became hosted by the United States Pacific Fleet in Pearl Harbor, Hawaii. He also created and hosted the Benkyoukai Initiative, a partnership between US Navy fighter squadrons based in Japan and the Japanese Air Self Defense Force to exchange knowledge and practice aerial war fighting. His command subsequently earned the US Navy's Battle Efficiency award, presented annually to the finest US Navy F/A-18 squadron in the Western Hemisphere.

Snodgrass served as Chief Speechwriter and Director of Communications to Secretary of Defense James Mattis from April 2017 to August 2018. He is the author of the Department of Defense's officially released Unclassified Summary of the 2018 National Defense Strategy, the most important military document produced under the Trump administration, which declared that “Inter-state strategic competition, not terrorism, is now the primary concern in US national security.”

He is a director on the board of the U.S. Naval Institute.

On September 5, 2018, the New York Times published an op-ed by a “senior official” in the White House, entitled “I Am Part of the Resistance Inside the Trump Administration.” One year later, the same unnamed official, who has been identified as Snodgrass[1], published a book elaborating on themes elucidated in the editorial. A Warning is currently #1 on the New York Times ’ nonfiction bestseller list:

"A back-of-the-envelope “whip count” was conducted of officials who were most concerned about the deteriorating situation. Names of cabinet-level officials were placed on a mental list. These were folks who, in the worst case scenario, would be amenable to huddling discreetly in order to assess how bad the situation was getting…"

"I froze when I first heard someone suggest that we might be getting into “Twenty-fifth territory.” Among the figures noted in the press as possibly amenable to such an endeavor were former Defense Secretary Mattis, former Secretary of State Rex Tillerson, former Chief of Staff Gen. John Kelly and former National Security Adviser Gen. H.R. McMaster."

The writer describes what the removal of the president via the 25th Amendment would look like:

Removal of the president by his own cabinet would be perceived as a coup. The end result would be unrest in the United States the likes of which we haven’t seen since maybe the Civil War. Millions would not accept the outcome, perhaps including the president himself, and many would take to the streets on both sides. Violence would be almost inevitable.

If Trump is “removed from office… and he refuses to go… He will not exit quietly—or easily… It is why at many turns he suggests ‘coups’ are afoot and a ‘civil war’ is in the offing.”[2]

To be noted is his early education in nuclear weapons questions and his recent MIT course making him part of the high level "national security community".

MIT Seminar XXI's mission is to educate current and future leaders in the U.S. government's national security community. Seminar XXI creates a link between the worlds of policymaking and academia, bringing together military and civilian executives with scholars from MIT and other world-renowned institutions. Through this interdisciplinary and intergenerational learning experience, Fellows share their differing viewpoints, challenge each other's assumptions, expand their interagency networks, and develop fresh ways of analyzing the complex national security issues they face each day. 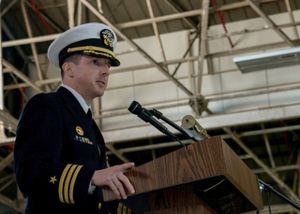