Furman University is a private liberal arts university in Greenville, South Carolina. Founded in 1826 and named for the clergyman Richard Furman,[1] Furman University is the oldest private institution of higher learning in South Carolina. It became a secular university in 1992, while keeping Christo et Doctrinae (For Christ and Learning) as its motto. It enrolls approximately 2,700 undergraduate students and 200 graduate students, representing 46 states and 53 foreign countries, on its 750-acre (304 ha) campus.

Furman Academy and Theological Institution was established by the South Carolina Baptist Convention and incorporated in December 1825 in Edgefield. With 10 students, it held its first classes January 15, 1828;[2] another source says it opened in January 1827.[3] Through 1850, average enrollment was 10 students, and it constantly tottered on the edge of insolvency. From 1829 to 1834, it operated in the High Hills of the Santee (now Stateburg, South Carolina). Furman closed from 1834 to 1837.[4] When the school reopened, at the urging of the Reverend Jonathan Davis, chairman of the Board of Agents, the school moved to his native Fairfield County, near Winnsboro.

In 1850 the state legislature chartered Furman University.[5] It was not until 1851 that South Carolina Baptists were able to raise the necessary funds for the removal of the school to Greenville, South Carolina.

The University closed from 1861 to 1866, when "most students and several faculty members enlisted in the Confederate forces."[6]

The Furman Institution Faculty Residence serves as a visible reminder of the early history of Furman University and its brief establishment in Fairfield County.[7] 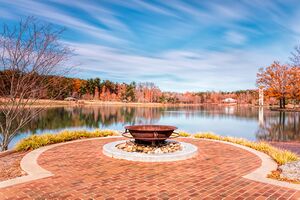 Furman University has been in its current location since 1958. The Furman Lake and Bell Tower (background; right) are prominent elements of the campus. 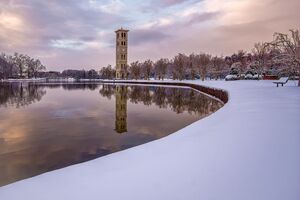 Located in the Upstate of South Carolina, Furman University gets snow in the winter as seen in 2016.

The first school building from the downtown Greenville campus was transported to the current campus, where it still stands. In 1933, students from the Greenville Women's College began attending classes with Furman students. Shortly thereafter, the two schools merged to form the present institution.

In 1924, Furman was named one of four collegiate beneficiaries of the Duke Endowment. Through 2007, Furman has received $110 million from the endowment, which is now one of the nation's largest philanthropic foundations. Three other colleges — Duke, Davidson and Johnson C. Smith — also receive annual support and special grants from the endowment.[8]

In 1954, Brown v. Board of Education found the "separate but equal" policy to be unconstitutional, starting the lengthy process of desegregating public schools. As of that date, Furman, like most Southern colleges, did not accept African Americans as students.

By 1963, enough faculty were siding with the students over racial desegregation that Furman's Board of Trustees voted to admit black students. Action on the trustees' decision was postponed and it was later overturned by South Carolina's Baptist Convention; desegregated admission was not implemented at Furman until its incoming president, Gordon Blackwell, a past president of Florida State University, made it a condition of his acceptance of the new position. In February 1965 Joe Vaughn, a graduate of Sterling High School, became Furman's first black undergraduate.

In 1992, Furman ended its affiliation with the South Carolina Baptist Convention and became a private, secular university, while keeping Christo et Doctrinae (For Christ and Learning) as the school's motto. Furman's "heritage is rooted in the non-creedal, free church Baptist tradition which has always valued particular religious commitments while insisting not only on the freedom of the individual to believe as he or she sees fit but also on respect for a diversity of religious perspectives, including the perspective of the non-religious person."[9]

The 2010s were transformative years for Furman through fundraising, resulting in new buildings, programs, and scholarships. The Because Furman Matters campaign began in 2004 and ended in 2013. The campaign was described as "the largest fundraising campaign ever among private colleges in South Carolina, and is also among the largest undertaken by any of the nation’s liberal arts colleges.".[10] It exceeded its objective of raising $400 million, of which 62% went to the endowment (which was valued at $380 million when the campaign started and increased to $623 million when it ended) and 17% went to building projects. Several such buildings were supported by successful graduates from the university via naming gifts. In 2012, a new $6.4 million facility was built for continuing education.[11] The Herring Center for Continuing Education was supported by Sarah and Gordon Herring, a leader in the television industry who served on committees with HBO and was one of the founders of the Weather Channel. In 2013, the student center went through a $7.75 million expansion and renovation. The alumni and businessman David Trone, together with his wife June, participated through a $3.5 million gift resulting in the center being named the Trone Student Center.[12]