Document:Why Wikileaks must be protected 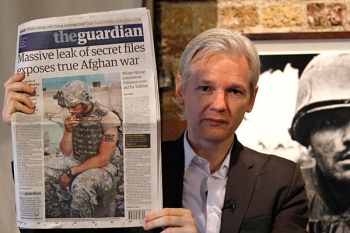 Why Wikileaks must be protected

On 26 July, Wikileaks released thousands of secret US military files on the war in Afghanistan. Cover-ups, a secret assassination unit and the killing of civilians are documented. In file after file, the brutalities echo the colonial past. From Malaya and Vietnam to Bloody Sunday and Basra, little has changed. The difference is that today there is an extraordinary way of knowing how faraway societies are routinely ravaged in our name. Wikileaks has acquired records of six years of civilian killing for both Afghanistan and Iraq, of which those published in The Guardian, Der Spiegel and the New York Times are a fraction.

There is understandably hysteria on high, with demands that the Wikileaks founder Julian Assange is “hunted down” and “rendered”. In Washington, I interviewed a senior Defence Department official and asked, “Can you give a guarantee that the editors of Wikileaks and the editor in chief, who is not American, will not be subjected to the kind of manhunt that we read about in the media?” He replied, “It’s not my position to give guarantees on anything”. He referred me to the “ongoing criminal investigation” of a US soldier, Bradley Manning, an alleged whistleblower. In a nation that claims its constitution protects truth-tellers, the Obama administration is pursuing and prosecuting more whistleblowers than any of its modern predecessors. A Pentagon document states bluntly that US intelligence intends to “fatally marginalise” Wikileaks. The preferred tactic is smear, with corporate journalists ever ready to play their part.

On 31 July, the American celebrity reporter Christiane Amanapour interviewed Secretary of Defence Robert Gates on the ABC network. She invited Gates to describe to her viewers his “anger” at Wikileaks. She echoed the Pentagon line that “this leak has blood on its hands”, thereby cueing Gates to find Wikileaks “guilty” of “moral culpability”. Such hypocrisy coming from a regime drenched in the blood of the people of Afghanistan and Iraq – as its own files make clear – is apparently not for journalistic enquiry. This is hardly surprising now that a new and fearless form of public accountability, which Wikileaks represents, threatens not only the war-makers but their apologists.

Their current propaganda is that Wikileaks is “irresponsible”. Earlier this year, before it released the cockpit video of an American Apache gunship killing 19 civilians in Iraq, including journalists and children, Wikileaks sent people to Baghdad to find the families of the victims in order to prepare them. Prior to the release of last month’s Afghan War Logs, Wikileaks wrote to the White House asking that it identify names that might draw reprisals. There was no reply. More than 15,000 files were withheld and these, says Assange, will not be released until they have been scrutinised “line by line” so that names of those at risk can be deleted.

The pressure on Assange himself seems unrelenting. In his homeland, Australia, the shadow foreign minister, Julie Bishop, has said that if her right-wing coalition wins the general election on 21 August, “appropriate action” will be taken “if an Australian citizen has deliberately undertake an activity that could put at risk the lives of Australian forces in Afghanistan or undermine our operations in any way”. The Australian role in Afghanistan, effectively mercenary in the service of Washington, has produced two striking results: the massacre of five children in a village in Oruzgan province and the overwhelming disapproval of the majority of Australians.

Last May, following the release of the Apache footage, Assange had his Australian passport temporarily confiscated when he returned home. The Labor government in Canberra denies it has received requests from Washington to detain him and spy on the Wikileaks network. The Cameron government also denies this. They would, wouldn’t they? Assange, who came to London last month to work on exposing the war logs, has had to leave Britain hastily for, as puts it, “safer climes”.

On 16 August, the Guardian, citing Daniel Ellsberg, described the great Israeli whistleblower Mordechai Vanunu as “the preeminent hero of the nuclear age”. Vanunu, who alerted the world to Israel’s secret nuclear weapons, was kidnapped by the Israelis and incarcerated for 18 years after he was left unprotected by the London Sunday Times, which had published the documents he supplied. In 1983, another heroic whistleblower, Sarah Tisdall, a Foreign Office clerical officer, sent documents to the Guardian that disclosed how the Thatcher government planned to spin the arrival of American cruise missiles in Britain. The Guardian complied with a court order to hand over the documents, and Tisdall went to prison.

In one sense, the Wikileaks revelations shame the dominant section of journalism devoted merely to taking down what cynical and malign power tells it. This is state stenography, not journalism. Look on the Wikileaks site and read a Ministry of Defence document that describes the “threat” of real journalism. And so it should be a threat. Having published skilfully the Wikileaks expose of a fraudulent war, the Guardian should now give its most powerful and unreserved editorial support to the protection of Julian Assange and his colleagues, whose truth-telling is as important as any in my lifetime.