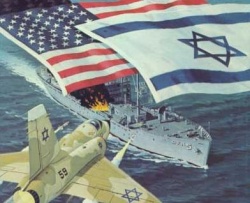 This article is based entirely on documented sources and on interviews with the survivors. Throughout the decades since this war crime was committed it has been covered up by all succeeding US administrations.

June 8, 1967 — the fourth day of the Six Day War between Israel and Egypt, Syria and Jordan — was a beautiful day in the Mediterranean. The USS Liberty was in international waters off the coast of Egypt. Israeli aircraft had flown over the USS Liberty in the morning and had reported that the ship was American. The crew, in close proximity to the war zone, was reassured by the presence of Israeli aircraft. But at 2:00 p.m. sailors sunbathing on the deck saw fighter jets coming at them in attack formation. Red flashes from the wings of the fighters were followed by explosions, blood and death. A beautiful afternoon suddenly became a nightmare. Who was attacking the USS Liberty and why? The attack on the Liberty was an attack on America.

The Liberty was an intelligence ship. Its purpose was to monitor Soviet and Arab communications in order to warn both Israel and Washington should the Soviets enter the war on behalf of its Arab allies. The Liberty was armed only with four machine guns to repel boarders. Its request for a destroyer escort had been denied.

The assault on the Liberty is well documented. With no warning, the Liberty was attacked by successive waves of unmarked jets using cannon, rockets and napalm. The attacking jets jammed all of the US communications frequencies, an indication they knew the Liberty was an American ship.

The air attack failed to sink the Liberty. About 30 minutes into the attack three torpedo boats appeared flying the Star of David. The Israeli boats were not on a rescue mission. They attacked the Liberty with cannon, machine guns and torpedoes. One torpedo struck the Liberty mid-ship, instantly killing 25 Americans while flooding the lower decks. The Israeli torpedo boats destroyed the life rafts the Liberty launched when the crew prepared to abandon ship, sending the message there'd be no survivors.

At approximately 3:15 two French-built Israeli helicopters carrying armed Israeli troops appeared over the Liberty. Phil Tourney could see their faces only 50/60 feet away. He gave them the finger. Surviving crew members are convinced the Israelis were sent to board and kill all survivors.

The Israeli jets destroyed the Liberty's communication antennas. While under attack from the jets, crew members strung lines that permitted the ship to send a call for help. The USS Saratoga and the USS America launched fighters to drive off the attacking aircraft, but the rescue mission was aborted by direct orders from Washington.

When the Liberty notified the Sixth Fleet it was again under attack, this time from surface ships, the Fleet commander ordered the carriers America and Saratoga to launch fighters to destroy or drive off the attackers. The order was unencrypted and picked up by Israel, which immediately called off its attack. The torpedo boats and the hovering helicopters sped away. Israel quickly notified Washington that it had mistakenly attacked an American ship, and the US fighters were recalled a second time.

The USS Liberty suffered 70% casualties, with 34 killed and 174 wounded. Although the expensive state of the art ship was kept afloat by the heroic crew, it later proved unsalvageable and was sold as scrap.

No explanation has ever been given by the US government for Defense Secretary Robert McNamara and President Lyndon B. Johnson's orders for the Sixth Fleet to abort the rescue mission. Lt. Commander David Lewis of the Liberty told colleagues that Admiral L. R. Geis, commander of the Sixth Fleet carrier force, told him that when he challenged McNamara's order to recall the rescue mission, LBJ came on the line and said he didn't care if the ship sank, he wasn't going to embarrass an ally. The communications officer handling the transmission has given the same account.

A BBC documentary on the Israeli raid reports confusion about the attacker's identity almost resulted in a US assault on Egypt. Richard Parker, US political counsel in Cairo, confirms in the BBC documentary he received official communication an American retaliatory attack on Egypt was on its way.

The US government's official position on the USS Liberty corresponds with Israel's: The attack was unintentional and a result of Israeli blunders. This is the official position despite the fact that CIA Director Richard Helms, Secretary of State Dean Rusk, Assistant Secretary of State Lucius Battle, and a long list of US Navy officers, government officials and Liberty survivors are on record saying the Israeli attack was intentional.

According to Helms, Battle and the minutes of a White House meeting, President Johnson believed the attack was intentional. Helms says LBJ was furious and complained when The New York Times buried the story on page 29, but that Johnson decided he had to publicly accept Israel's explanation. "The political pressure was too much," Helms said.

US communications personnel, intelligence analysts and ambassadors report having read US intercepts of Israeli orders to attack the Liberty. In one intercept an Israeli pilot reports that the Liberty is an American ship and asks for a repeat and clarification of his orders to attack an American ship. One Israeli who identified himself as one of the pilots later came to America and met with US Representative Pete McCloskey and Liberty survivors. The pilot said he had refused to participate in the attack when he saw it was an American ship. He was arrested upon returning to base.

The Liberty flew the US flag. The ship's markings, GTR-5, measured several feet in height on both sides of the bow. On the stern the ship was clearly marked USS LIBERTY. Mistaking the Liberty for an Egyptian ship, as Israel claims to have done, was impossible.

The Israelis claim the Liberty flew no flag, but two US flags full of holes from the attack exist. When the first flag was shot down, crewmen replaced it with a flag 7-feet by 13-feet. This flag, with its battle scars, is on display at NSA headquarters at Ft. Mead, Maryland.

Admiral John S. McCain Jr., the father of the current US senator, ordered Admiral Isaac C. Kidd and Captain Ward Boston to hold a court of inquiry and to complete the investigation in only one week. In a signed affidavit Captain Boston said President Johnson ordered a cover-up and that he and Admiral Kidd were prevented from doing a real investigation. Liberty survivors were ordered never to speak to anyone about the event. Their silence was finally broken when Lt. Commander Jim Ennes published his book, Assault on the Liberty.

It is now established fact that the attack on the Liberty was intentional and was covered up by President Johnson and every administration since. There has never been a congressional investigation, nor has the testimony of the majority of survivors ever been officially taken. Moreover, testimony that conflicted with the cover-up was deleted from the official record.

Disgusted by the US government's official stance discounting the survivors' reports, Admiral Tom Moorer, retired Chief of Naval Operations and Chairman of the Joint Chiefs of Staff, organized the Moorer Commission to make public the known facts about the attack and cover-up. The Commission consisted of Admiral Moorer, former Judge Advocate General of the US Navy Admiral Merlin Staring, Marine Corps General Raymond G. Davis and former US Ambassador to Saudi Arabia James Akins.

Why did Israel attack the Liberty? Was something super secret going on that is so damaging it must be protected at all cost?

Some experts believe Tel Aviv decided to sink the Liberty because the ship's surveillance capability would discover Israel's impending invasion and capture of Syria's Golan Heights, an action opposed by Washington. Others believe Israel was concerned the Liberty would discover Israel's massacre of hundreds of Egyptian POWs, a war crime contemporaneous with the attack on the US ship. Still others believe that Israel intended to blame the attack on Egypt in order to bring America into the war. It is known the US was providing Israel with reconnaissance and that there were joint US-Israeli covert operations against the Arabs that Washington was desperate to keep secret.

Survivors with whom I spoke said the attack was the easy part of the experience. The hard part has been living with 40 years of official cover-up and betrayal by the US government. One survivor said that he was asked to leave his Baptist church when he spoke about the Liberty, because the minister and fellow church-goers felt more loyalty to Israel than to a member of the congregation who had served his country. His church's position was that if our government believed Israel, the survivors should also.

Survivor Phil Tourney said that "being forced to live with a cover-up is like being raped and no one will believe you."

Survivor Gary Brummett said he "feels like someone who has been locked up for 40 years on a wrongful conviction." Until the US government acknowledges the truth of the attack, Brummett says the survivors are forced to live with the anger and dismay of being betrayed by the country they served.

Survivor Bryce Lockwood has been angry for 40 years. The torpedo that killed his shipmates, wrecked his ship and damaged his health was made in the USA.

Survivor Ernie Gallo told me he "has been haunted for four decades" by the knowledge that his commander-in-chief recalled the US fighters that could have prevented most of the Liberty's casualties.