Document:The Road to Hell: A Brief History of Modern Syria 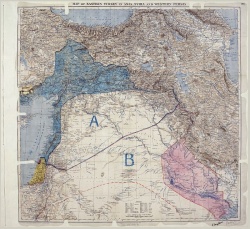 The Road to Hell: A Brief History of Modern Syria

In spite of the ongoing struggle for dominance in Syria by the various factions, there is in fact less and less to dominate, as the country has largely been destroyed by the four-year war raging there. It is commonplace to see a picture of a Syrian army soldier flashing a “V" for victory sign after some recent success in battle, while in the background most of buildings in the town or city depicted lie in ruins, and the former occupants of the dwellings are living elsewhere in refugee camps. More than 400,000 Syrians have been killed in the four-year war, at least one million have been wounded, and an estimated twelve million Syrians (half the population) are refugees, some inside and some outside the country.<refReport on Syria conflict finds 11.5% of population killed or injured - Guardian 11 February 2016</ref> An entire generation of Syrian children are growing up without an education in a landscape laid to waste. In this sense Syria has become hell on Earth. How did this happen?

It might seem that Syria is inherently difficult to unite and govern and is therefore in constant danger of fracturing, composed as it is of a plethora of religious sects and ethnic groups, including Sunnis, Shia, Alawites, Druze, Greek Orthodox Christians, Maronite Catholics, and among ethnic groups primarily Arabs (90%) and Kurds (9%). But somehow Syria’s pluralistic society experienced 400 years of almost continual peaceful coexistence as part of the Ottoman Empire. Therefore there must be a divisive force today that is consciously or unconsciously driving a wedge into the formerly pluralistic society and causing it to splinter. A brief review of Syrian history since the collapse of the Ottoman Empire may help clarify why Syria is shattered into pieces today.

While it was the allied forces of the United States, England and France that brought an end to the Ottoman Empire when it was defeated along with Germany at the end of World War I, it was primarily Syrian Arabs fighting for an independent Syria that defeated the Turks and took Damascus in 1918. [1] Soon afterwards, elections for a Syrian National Congress were held, with delegates representing all sectors of “Greater Syria,” which at that time included Lebanon and Palestine. Despite earlier British promises to Arab leaders that Arab territories would be free to rule themselves (in trade for Arab participation in the British war effort), Britain and France signed a secret accord called the Sykes-Picot Agreement in 1916 dividing up the Arab world between them as “spheres of influence and control.” In the agreement Syria was given to France, while Britain took control of Palestine, Jordan and Iraq. The newly formed Syrian parliament refused to acknowledge any right claimed by the French to any part of Syrian territory. In 1920 France issued an ultimatum to the Syrians to relinquish control, and then intervened militarily and occupied Damascus in June 1920, dissolving the Syrian Congress.

In the Sykes-Picot Agreement Palestine was split off from Syria as a separate entity, control of that territory soon given to Britain. This was in anticipation of turning Palestine into a new Jewish state, as had been promised in the 1917 Balfour Declaration, even though at that time Palestine was 85% Arab and only 7% Jewish. The leading theory for why the British government made this agreement is “to assist in the fulfillment of biblical prophecy.” [2] Arthur Balfour (for whom the Declaration was named) was a fundamentalist Christian who believed that the Almighty had chosen him to be an instrument of the Divine Will, the purpose of which was to restore the Jews to their ancient homeland, as a precursor to the Second Coming of the Messiah (as prophesied in the bible, see for example Luke 21:24). For the Jews to succeed in this divinely inspired task they had to drive 700,000 Palestinians out of the country. Israel now claims 80% of what had been Palestine, while there are 4,255,000 million Palestinian refugees living in Syria, Lebanon, Jordan and the West Bank. Understandably, this imposition of a Jewish state on Arab land has not been fashionable with the Arabs.

French rule over Syria was unpopular and was resisted. A revolt broke out in 1925 with fierce battles being fought and Damascus being shelled by the French. Syrians declared independence a second time in 1936, but the French refused the proposition. Independence was declared a third time in 1941, when France itself was occupied by Germany. When the French government came back into power in 1945, it attempted to regain its Syrian colony (just as it attempted to regain control of Vietnam and the rest of what it called “French Indochina”), aerially bombing and shelling Damascus, killing 400 people, destroying hundreds of homes and burning the parliament building to the ground. Continuing pressure from Syrian nationalist groups forced the French to evacuate the last of their troops in April 1946 and Syria became an independent state, overseen by a government which had been elected by the Syrian people in 1943.

Direct U.S. involvement in Syria began in 1949, when the U.S. Central Intelligence Agency (CIA) sponsored a coup that overthrew President Shukri al-Quwatli. [3] The overridding U.S. policy objective in Syria at the time was allowing the construction of the Trans-Arabian Pipeline, which the democratically elected government of Syria had blocked. The pipeline project was immediately ratified following the successful coup. When U.S. State Department official Dean Hinton became aware of the planning for the coup, he presciently stated, “I want to go on record as saying that this is the stupidest, most irresponsible action a diplomatic mission like ours could get itself involved in, and that we've started a series of these things that will never end.” [4]

After this initial imposition of American will on Syria, instances of U.S. intervention in Syrian affairs are almost too numerous to recount. [5] In 1956 the CIA planned to once again overthrow al-Quwatli, who had been re-elected to the Syrian presidency the previous year. When that plan failed another coup attempt was fomented by the CIA in 1957, followed by a CIA-planned triple assassination of three Syrian government leaders (who had helped foil the 1957 coup attempt), this being part of a larger plan to disrupt the functioning of Syrian society. This effort included supplying weapons to paramilitary groups including the Muslim Brotherhood, leading then (according to the CIA plan) to an invasion of Syria to establish a government compliant with U.S. demands. These well-documented affront to Syrian sovereignty will give the reader an understanding of American efforts to control the policies and the politics of Syria and the Middle East without enumerating a long list of outrages against the Syrian people. It also goes a long way in explaining why the Syrian government evolved from democratic beginnings to a controlling authoritarian state; there were constant pressures from abroad to destroy it.

A series of papers written by Israeli and American policy think tanks in the 1980s and 1990s advised that the best way to enhance the security of Israel would be to break up the Arab world into statelets. The initial division of the Middle East under Sykes-Picot was devised to deflect Arab unity. In 1920 the French created the new state of Lebanon out of the coastline of Syria; in 1922 Palestine was extracted from Greater Syria. An Israeli paper titled A Strategy for Israel in the 1980s recommended “the division of the whole area into small states by the dissolution of all existing Arab states.” [6] An American Report issued 1996 noted that “Israel can shape its strategic environment by weakening Syria, and recommended regime change in Iraq in order to weaken Syria. [7] In 2006 William Roebuck, chargé d'affaires at the US embassy in Damascus outlined strategies for destabilizing the Syrian government and presented the increasing presence of Islamic extremists as an ‘opportunity,’ [8] and indeed the following year the Bush administration began to fund Islamic fundamentalists in Syria, including the Muslim Brotherhood. [9] Robert Kennedy Jr. wrote in a lengthy article on Syria in early 2016 that the war in Syria did not start with protests in 2011, but rather “when Qatar proposed to construct a $10 billion, 1,500km pipeline through Saudi Arabia, Jordan, Syria and Turkey”— which Syria opposed. [4]

A more accurate starting point for the war in Syria would be the secret drafting of the Sykes-Picot Agreement in 1916, which operated under the grandiose presumption that the British and the French had some mysterious right to dictate the future of other societies and nations. A second step towards the war in Syria was the pathological imaginings of Arthur Balfour, who perceived himself as a divinely chosen messenger, the message being the transfer of Palestine from the Arabs to the Jews for Christ’s sake. Then came years of American covert and overt intervention, including repeatedly supporting and arming Islamic fundamentalists. The propriety and legality of this sordid tale of decades of American intervention in the internal affairs of Syria (and many other societies and countries) is summarized by an observation by political commentator Noam Chomsky, who stated that if the laws formulated at the Nuremburg trials in Germany at the end of World War II to try and sentence the Nazi war criminals were to be upheld, “then every post-war American president would have been hanged.” [10]

It must be noted that America’s inimical behavior towards Syria is not an isolated phenomenon; the United States has executed serious interventions into the functioning of other nations at least 70 times since the end of World War II [11], slaughtering an estimated 20 to 30 million people in their home countries in that time [12]. Americans with any sense of ethics, intelligence or love for the rest of humanity who want to participate in altering this tragic scenario are going to have to come up with “a new way of thinking,” as Albert Einstein put it. The core problem is twofold,