Document:People and Data Cherry-Picked For the IPCC Political Agenda 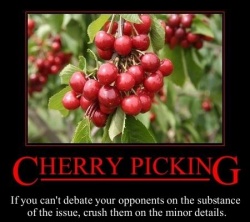 
Author's Note When we allow science to become political then we are lost. We will enter the internet version of the Dark Ages, an era of stifling fears and wild prejudices, transmitted to people who don’t know any better.

Cherry-picking data in climate science gained notoriety during the joint Committee Hearing chaired by Representative Barton on the “hockey stick.” Steve McIntyre reported, “D’Arrigo put up a slide about “cherry picking” and then she explained to the panel that that’s what you have to do if you want to make cherry pie.” [1] There’s another form of cherry-picking central in Intergovernmental Panel on Climate Change (IPCC) science that involves finding people to produce the science you want. They bring the cherry-picked data with them.

Anthropogenic global warming (AGW), first appeared on the world stage after the 1988 hearing before the Senate Energy and Natural Resources Committee. [2] Chair Senator Timothy Wirth described arranging for the appearance of James Hansen whose testimony became central justification for the global warming fiasco that still continues. It was the first major example of picking people from obscurity to advance the political agenda of global warming.

Wirth explains how he organized Hansen’s appearance in an interview with Frontline. In response to the question “How did you know about Jim Hansen?” He replied;

“I don’t remember exactly where the data came from, but we knew there was this scientist at NASA who had really identified the human impact before anybody else had done so and was very certain about it. So we called him up and asked him if he would testify. Now, this is a tough thing for a scientist to do when you’re going to make such an outspoken statement is this your part of the federal bureaucracy. Jim Hansen has always been a very brave and outspoken individual.” [3]

Wirth set the stage by holding the hearing on the historically hottest day of the year in Washington and the night before opening the windows and shutting off the air conditioning in the room. Wirth later said, “We’ve got to ride the global warming issue. Even if the theory of global warming is wrong, we will be doing the right thing…” Wirth led the US negotiating team at the Kyoto Summit. Hansen became head of NASA Goddard Institute of Space Studies (GISS) where he was a very politically active bureaucrat. [4] His blatant flaunting of the Hatch Act [5] suggests political protection.

Benjamin Santer, an American, took a B.SC in Environmental Science and a Ph.D., in Climatology at the Climatic Research Unit (CRU) in England, graduating in 1987. His thesis supervisor Tom Wigley Director of CRU, later moved to the National Center for Atmospheric Research (NCAR), where Stephen Schneider worked. Santer’s thesis, "Regional Validation of General Circulation Models" used the three top models and data from around the North Atlantic. They did not recreate actual condition and produced large non-existent pressure systems. They failed a standard validation test.

Just three years after graduation he appears as B.D.Santer from the Max Planck Institute as a Contributor to Section 8 of the 1990 IPCC Report. [6] Tom Wigley was lead author of Section 8. By the 1995 Report Santer was convening lead author for Chapter 8. In that Report he was caught changing the story agreed to by his fellow authors from no evidence of a human signal, to “a discernible human signal”. Santer claims he was ready to quit science because of the attacks for his deception but received encouragement from the promoter of climate exaggeration and participant in four IPCC Reports, Stephen Schneider. Santer said, “Steve was a huge source of support to me, He told me, ‘Ben, some things are worth fighting for, and this is worth fighting for.’” [7] Likely the fight is for “the cause” identified in the leaked CRU emails.

David Demings’ congressional testimony gives insight into how the CRU/IPCC dealt with problems. It involved the challenge the Medieval Warm Period posed for the IPCC. Deming wrote,

With the publication of the article in Science [in 1995], I gained significant credibility in the community of scientists working on climate change. They thought I was one of them, someone who would pervert science in the service of social and political causes. So one of them let his guard down. A major person working in the area of climate change and global warming sent me an astonishing email that said “We have to get rid of the Medieval Warm Period.”
[Emphasis added]

The IPCC needed somebody to get rid of the Medieval Warm Period (MWP). This was part of the challenge posed by Figure 7c in the 1990 Report. [8] Existence of the MWP contradicted the IPCC claim that the late 20th century was the warmest ever. Two arguments were tried. One was a personal attack on Willie Soon and Sallie Baliunas and their article Proxy climatic and environmental changes of the past 1,000 years, Soon, W., and S. Baliunas, 2003 Climate Research, 23, 89–110 which established existence of the MWP from a multitude of sources. The leaked CRU emails exposed John Holdren, Obama’s Science Tsar, as an active and virulent part of the personal attacks. On 16th October 2003 Michael Mann sent an email;

Thought you would be interested in this exchange, which John Holdren of Harvard has been kind enough to pass along…”

The second was the claim that the MWP was not global. Attacks on Soon and Baliunas and the “not global” claim had little traction, especially for the mainstream media and the public. The IPCC were aware prior to the 1995 Report they had to get rid of the MWP and it required supposedly scientific evidence. It led to the next cherry picking.

Barry Saltzman, climate professor at Yale from 1968 to his death in 2001 had his work “Theory of Climate” published posthumously in 2002. [9] He was labeled, “the father of modern climate theory” by the American Meteorological Society (AMS). In their accolades the AMS said, “Barry Saltzman led the revival of the theory that variations of atmospheric CO2 are a significant driver of long-term climate change.” Saltzman identified his challenge as one that confronts all specialists who study climate, a generalist discipline. The need was, as he put it, to bridge the “cultural gap”. This challenge is where most corruption of climate science occurs. People using unfamiliar specialist procedures and methodologies to achieve a result to support their climate beliefs. Saltzman identified a major bridging area when he identified the skills of those who “have brilliantly and painstakingly been reconstructing the paleoclimatic record. It is again my hope that this book will help bridge this gap.”

Salzman supervised Michael Mann’s thesis, a person he thought would bridge the gap between his theory and temperature. The shifts in focus and speed with which Michael Mann took center stage at the IPCC are revealing.

His doctoral thesis “A study of ocean-atmosphere interaction and low-frequency variability of the climate system” and other work did not involve dendroclimatology until he connected with Raymond Bradley and Malcolm Hughes. The collaboration created the now discredited “hockey stick” graph that eliminated the MWP. He provided the mathematical and computer model techniques to bridge the gap for Bradley and Hughes as Saltzman had hoped.

Mann’s acceleration from obscurity paralleled Hansen and Santer. In 1998, the same year he received his PhD and there are reports it was rushed through, he became contributing author for Chapters 7, 8, and 12 as well as Lead Author for Chapter 2 of the IPCC Third report scheduled for release in 2001. He later became central to the production of the Summary for Policymakers (SPM) that re-emphasized the hockey stick claims. These activities triggered the first recommendation of the Wegman Report [10]

Recommendation 1. Especially when massive amounts of public monies and human lives are at stake, academic work should have a more intense level of scrutiny and review. It is especially the case that authors of policy-related documents like the IPCC report, Climate Change 2001: The Scientific Basis, should not be the same people as those that constructed the academic papers.

The IPCC had no choice but to give Mann such prominence because his work was deliberately unique.

Another form of cherry picking involved the selection of members of the IPCC. Maurice Strong set it up through the World Meteorological Organization (WMO) so that all participants were bureaucrats or selected by bureaucrats. As Richard Lindzen explained,

“IPCC’s emphasis, however, isn’t on getting qualified scientists, but on getting representatives from over 100 countries, said Lindzen. The truth is only a handful of countries do quality climate research. Most of the so-called experts served merely to pad the numbers.”

“It is no small matter that routine weather service functionaries from New Zealand to Tanzania are referred to as ‘the world’s leading climate scientists.’ It should come as no surprise that they will be determinedly supportive of the process.”

The Canadian example typifies activities because Environment Canada was involved from the start. Assistant deputy Minister Gordon McBean chaired the IPCC founding meeting in Villach Austria in 1985. Former Minister of Environment, David Anderson (He has a dog named Kyoto) announced they consulted all Canadian climate experts on the Kyoto Protocol. Eight scientists held a press conference in Ottawa to say they were not consulted. Anderson, who had not announced Kyoto plans, suddenly scheduled their announcement at exactly the same time as the scientist’s press conference thus drawing media attention.

Environment Canada (EC) diverted so much funding to climate change they failed to provide proper service. This triggered political questions so they were ordered set up an independent investigation. They reported the truth as Kenneth Green confirmed when he wrote:

The Impact Group, a contractor working for Environment Canada”s Meteorological Service of Canada (MSC), has released materials that support the contention that policy is driving climate science in Canada, not the other way around. [11]

EC did not release the results, but as Green notes,

Elements of an “Action Plan for Climate Science Research at MSC” (obtained through an Access to Information request) indicate that Canada’s climate change science program is being driven by a predetermined political agenda with a clear disregard of scientific needs. [11]

This comment applies to all national weather agencies and thereby to the IPCC process. It doesn’t get much more corrupt in science than cherry-picking data and people.